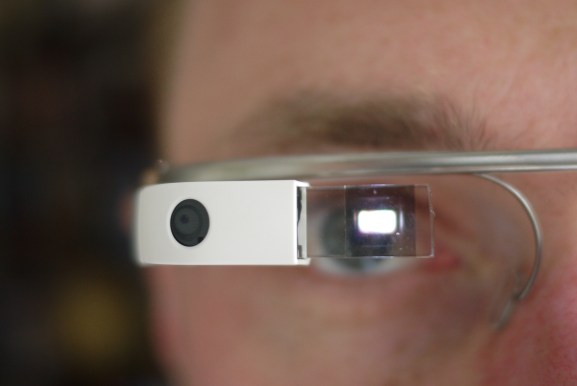 Google Glass: watching me, watching you.

SANTA CLARA, Calif. — At DEMO today, People+ made its debut onstage. Its founders call it a Google Glass Wikipedia for people and companies.

Sounds a lot like LinkedIn, which has been pushing hard on mobile lately.

However, founder and CEO Peter Berger told us in the moments before the show started, “There’s a big difference between what LinkedIn’s doing and what we’re doing … We’re focused on the facts about people and companies.

“There’s a lot of surplus and exposition in LinkedIn to get pageviews. We can be broader than that. We feel like we’re the app you use in the five minutes before any meeting.”

Of course, LinkedIn would tell you it’s aiming for (and has already reached) that same goal. But Berger feels LinkedIn’s mobile traffic is “tragic” and that its users need new tools to get simple facts, not an elaborate social network. The big change lies in the format even more than the content.

“We realized early on that wearable is going to be a dynamic sea change for development in the way that mobile was to web,” Berger said.

“Unless you’re developing for wearable now, you’re going to get left in the dust. We actually consider ourselves a wearable-first company.”

And that means that LinkedIn’s menus, ads, and extraneous information had to deboard the plane.

“When you have a tiny screen, you get rid of a lot of dumb surplus,” Berger continued. “And you can’t type. We need to get you the right information without you having to type anything.”

So the information the app presents is pared down to just two facts: To whom are you talking, and why.

“I come from a sales background,” said Berger. “There was just nothing in mobile that let me get very basic information on people on mobile and quickly.”

And then, there’s the Wikipedia aspect. LinkedIn is entirely reliant on self-reporting, and we’ve all encountered examples of LinkedIn cheaters (who lie or exaggerate about contracting work and internships) or folks who just don’t update their profiles. With People+, the community can add or flag data, and the app pulls in data from reliable web sources, as well.

We asked whether, to better and more quickly answer those two aforementioned questions, People+ would integrate with the user’s calendar. “There’s a lot of things on our roadmap, and we’re going to focus on customer demand,” Berger said.

Here’s a look at the app itself, which is also available on iPhone: