Voxeljet is probably the only 3D printing company that has the approval of both investors and James Bond.

The German company, which makes large format commercial 3D printers, made a strong public debut on Friday. While Voxeljet priced its 6.5 million shares at $13 each, trading pushed their price up by a much as 77 percent to $26 this morning. The company is valued at roughly $400 million.

Why such interest? It turns out that Voxeljet printers are really good at manufacturing large prototypes very quickly. This is a huge benefit for companies in a variety of industries, but it’s especially big for car markers like Daimler AG and Ford, both of which have used Voxeljet printers for their prototypes.

It’s huge for movie studios as well: For the 2012 James Bond movie Skyfall, Propshop Modelmakers used Voxeljet’s 3D printers to create three full-scaled replicas of the ultra-rare Aston Martin DB5. The cars, which are ultimately destroyed in the film, are almost indistinguishable from the original, thanks in large part to Voxeljet’s printers. 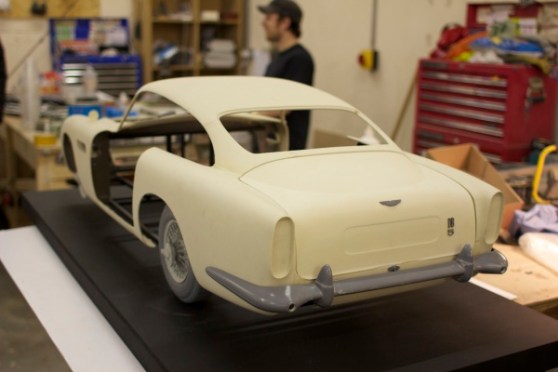 Above: Voxeljet’s printers are fast, powerful, and create ultra-convincing replicas.

“In addition to the automotive industry, foundries, designers, and artists, the film industry represents an entirely new customer base for Voxeljet. 3D printing is on the cusp of a great future in the film industry,” Voxeljet CEO Ingo Ederer said last November.

In other words, Voxeljet’s approach has many, many applications. And that can only mean one thing: lots of room for growth.