Mark Cerny has been busy as the system architect for the PlayStation 4. But he has also built a game to show it off with a cute character called Knack, who starts as a 3-foot-tall mascot and then grows into something bigger.

Knack is an imaginative launch title that is designed to show off  the graphics and physics capabilities of the PS4. At the same time, it’s a “mashup of a Pixar-style family film and a character action game.” It has plenty of cutscenes where the characters talk to each other that advance the story. It’s a 3D platform game, reminiscent of Cerny’s (and Naughty Dog’s) Crash Bandicoot on the original PlayStation, which he described as a brutally difficult game. 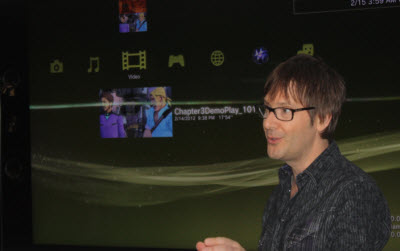 The little guy is made up of various particles known as Relics that can absorb and hold together using a magical energy force. Knack starts out small but grows bigger, stronger, and more menacing as he picks up more and more Relics. That means he can become a 30-foot-tall rampaging monster, with an amusingly deep voice.

We got a preview of the fortress level in the title, which is coming out exclusively on the PS 4 on Nov. 15, in a session at Sony’s U.S. game headquarters in Foster City, Calif. Cerny narrated the preview and then we got some hands-on time. Here’s our impressions.

Knack is a character that can appeal to both hardcore gamers and a broader audience.

Hardcore players can appreciate the gameplay possibilities with a character who can assemble and disassemble himself at will. He can grow massively powerful so that he can take out enemies — a race of nasty goblins — with one punch.

But Knack is a cute character with cartoon-style graphics that will be appealing to people who aren’t typical gamers. He uses an energy to bind together shapes that give him his own form. Cerny said that his team designed the character and the game so that first-time gamers might also enjoy it. The game will be rated Everyone 10+.

“Knack was constructed with two very different audiences in mind,” Cerny said. “It is for core gamers who enjoy mascot platform games like Crash Bandicoot on the original PlayStation. Crash was a brutally difficult game. Even on a normal setting, Knack is pretty challenging. You have to master the moveset.

“On easy, it is a dramatically different game. It can be someone’s first console game. My intent was there would be something for the rest of the family: sons, daughters, spouses.”

The game will be hard or easy based on your own choices. Kids can play it on the lowest setting. Two players can play cooperatively and make the combat even easier. The second player can pay as “Robo Knack,” or a small robotic character who can help heal Knack. Robo Knack can donate parts to make Knack bigger, but when he does so, Robo Knack shrinks.

But Cerny said the game is designed on normal and hard settings to provide challenges to hardcore gamers. In several sections of the fortress level that Cerny showed us, I died as I was trying to escape the blasts, arrows, and sword thrusts of enemies. A big boss battle at the end of the fortress level is very difficult to beat the first time around.

Kids will probably enjoy picking up the Relics, which are spheres, cubes, or pyramids that Knack uses to bulk himself up. 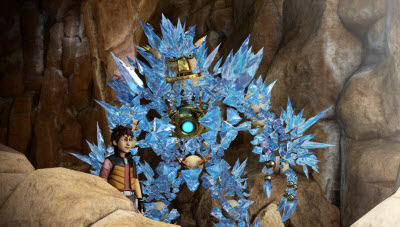 Above: Knack with icicles

Hey, you got the Pixar in my game?

The levels and areas look as detailed as a computer-generated animated film. Sometimes, there’s a trade-off between the intensity of action sequences and the beauty of the background. In this case, you’ll see cool-looking background imagery and lighting — as well as fast action combat.

The gameplay has a lot of variety. You can sneak around a bit and run fast when you’re small. When you’re massive, you don’t have to worry as much about taking damage. Little Knack can absorb “sun stone” energy. Once his Sun Stone meter hits a certain level, he can launch devastating one-time “super move” attacks. Big Knack can pick up cars and fling them at aircraft. But there are a wide variety of goblin enemies. Some lay mines that can take Knack out. Archers and tanks can hit him from afar, while sword-wielding goblins can attack him up close.

Whenever Knack dies, he reassembles and is ready to fight again. When Knack is big, he can destroy buildings and wreak havoc through a city. The game has a lot of treasure collection There are 60 secret rooms with treasure chests filled with unique Relics.

There’s more to Knack than just growing bigger. When he is small, you can’t take on big goblins. But he doesn’t always need Relics to get bigger. He can pick up icicles and become stronger, but only for a limited time, since the icicles will melt in the sun. He can also strengthen himself with wooden objects, but if someone sets him on fire, the wood will burn up. In one section, where Knack is made of icicles, he gets smaller and smaller as he has to take on more and more enemies guarding a gate. So that means that the icicles add pressure to finishing off the enemies before they disappear.

Here’s a screenshot gallery below.