Imagine a toy that can crack jokes with your child in Japanese.

A group of teachers and entrepreneurs have developed a connected soft toy called “Ubooly,” and already smashed their funding goals on Kickstarter. Demand for the interactive pet, which is selling on Amazon for under $30, is so strong that the company plans to begin selling internationally.

The toy becomes “smart” when you insert a smartphone or iPad mini in the top of its head, and zip it closed. The mobile device functions as a brain of sorts, so the Ubooly can converse with a child, tell stories, teach math, demonstrate teeth brushing, suggest healthy eating options, and more.

The Ubooly integrates with a variety of iOS and Android devices. Using advanced speech recognition technology, it can have a conversation in over five languages, and immediately recognizes your child’s name. The toy is ideal for kids ages 4 to 7. 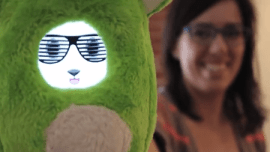 “We took one walk down the toy isle at Target and said ‘we can do better than this’,” said Carly Gloge, one of Ubooly’s cofounders, in an interview.

Gloge spent six years working on mobile apps and games for kids, primarily as a consultant. After she got the idea for Ubooly, Gloge hired a team of designers, developers, therapists, comedy writers, and teachers to help her build the toy. The Boulder, Colorado-based company has raised $2.5 million to date, primarily through Kickstarter campaigns, and a small seed round from SoftTech’s venture fund.

Gloge said that the most impressive statistic about the Ubooly is retention. In the digital age, it’s become more difficult to hold a child’s attention. But the Ubooly keeps kids hooked for an average of 35 days, a number that continues to increase.

One parent, Chelsea, commented on the Kickstarter page that the Ubooly keeps her child hooked while she does the dishes. “I love knowing that I can sit my daughter down with Ubooly for a couple minutes…she can learn addition or spelling rather than watch mindless television.”

“As we get more entwined with the toy industry, it becomes more and more obvious that the big guys have lost their way,” said Gloge, adding that the focus is too often about “branded characters and marketing,” rather than education.

With the money it raised on Kickstarter, currently over $40,000, Ubooly plans to bring on more educators and therapists. The company has also promised to develop more costumes for the Ubooly, so kids can dress it up as a ninja or teacher.

Ubooly is a recent graduate of the TechStars program, an accelerator for early-stage startups. The company plans to raise a Series A round of venture financing in the spring.

Check out the video below to learn more about Ubooly.