Many people credit The Elder Scrolls V: Skyrim as one of the best role-playing games in its genre, but, arguably, its character-creation system could have more options.

That doesn’t look like it’ll be a problem with The Elder Scrolls Online, the massively multiplayer fantasy online title coming from Skyrim maker Bethesda Softworks. ZeniMax Online Studios and sister firm Bethesda Softworks are teasing some robust new tools in ESO’s character-building engine, showing how the developers have overhauled the entire system to let players drastically tweak their heroes’ faces, bodies, and features.

The variety appears far deeper than Skyrim’s offering, where characters’ bodies were generally the same size and shape regardless of species, gender, and skin color.

You can now alter all of that to rather pleasing extremes, with ESO’s creation engine presenting choices much more like what you might see in WWE wrestling releases or the Saints Row franchise. 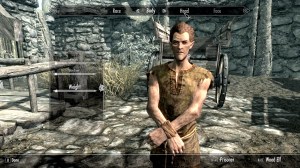 Above: Body types don’t really exist in Skyrim. Everyone apparently hits the gym a lot.

By far, the biggest change is in characters’ bodies. Skyrim simply allows players to adjust a character’s weight just a few notches, which can only make the uniformly skinny characters slightly more broad.

“For the body, we wanted players to really define their physique. So, you can create an overweight character or a skinny character; you can adjust the height no matter what race you are,” explains art director Jared Carr in a video from ZeniMax Online that details the system (above).

“There’s lots of tattoo options for both body and the face, separately, and then, we even let you get really specific [by] adjusting the width of the shoulders, the thickness of the arms, the size of the hands, for example. We really wanted to give the players a lot to play with.”

Players’ mileage might vary on what ZeniMax and Bethesda call “skinny,” though.

Certain options for body type allow characters to be noticeably thick, but still seem to keep even the largest Nords and Orcs from completely letting themselves go.

Carr also noted that characters’ faces are decidedly less hideous this time around, with options letting you adjust “forehead slope,” “eye separation,” and other features.

These updates make sense. The Elder Scrolls Online is primarily a third-person-perspective adventure, so gamers will be far more aware of their warriors’ looks.

The Elder Scrolls Online should hit Mac, PC, PlayStation 4, and Xbox One near the end of this year, and then, we can all fuss over our hairstyles together.