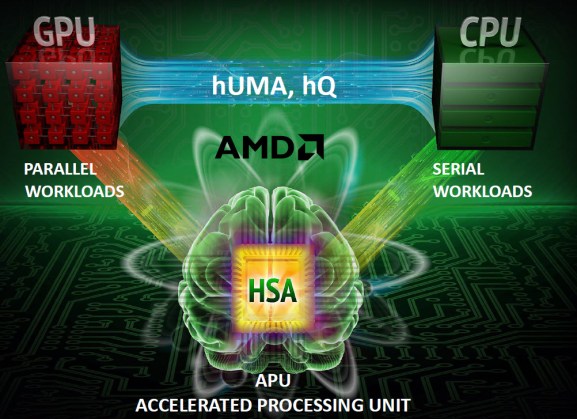 Advanced Micro Devices said that it has created a new design for processing data that will generate much better performance for a whole new generation of electronic devices. AMD has the backing of a whole consortium of other chip and system makers, but its rivals Nvidia and Intel haven’t gone along yet. 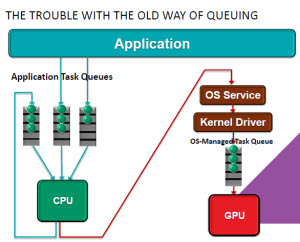 The Heterogenous Systems Architecture (HSA) is pretty arcane technical material for consumers, but if it takes off, AMD says it will lead to faster and more power-efficient personal computers, tablets, smartphones and cloud servers. It goes hand-in-hand with hUMA, a new way for processors to access the memory inside an Accelerated Processing Unit, or a single chip that combines both a microprocessor and graphics.

All of this functions used to be part of separate chips. But now they can be packaged inside the same system-on-chip, or SoC, on the same piece of silicon. The three different kinds of processors access data in different ways, but AMD wants to change and simplify that.

To date, programmers have been unable to harness the whole power of an APU. But with heterogenous queuing and HSA, AMD says that it will be easier to better utilize the system’s resources, improving computing for a variety of tasks. It will be useful in gaming, natural user interfaces, accelerated video and image editing, and accelerated media playback. These kinds of tasks place far more stress on the system than previous kinds of computing tasks.