You might know that Rune Factory emerged from Harvest Moon, the farming and life-simulation series that began on the Super Nintendo, but that might be the extent of your familiarity. It’s pretty niche.

Rune Factory is basically Harvest Moon plus role-playing elements, but it adds up to a lot more than that. Playing Rune Factory 4, the latest entry for 3DS, reminded me of a lot of great games. It’s one giant hodgepodge.

Below, we’ve broken down some main components and matched them with series that are much more recognizable. So chances are if you like one of these, you’ll find something to enjoy in Rune Factory 4 — plus a little extra. Xseed Games’ Brittany Avery, who works in localization, shared some secrets with us about what makes Rune Factory 4’s twist on those elements unique.

Rune Factory 4 opens on an airship, and the vibe is reminiscent of countless scenes from the Final Fantasy role-playing games. But in Rune Factory, airships aren’t just for travel — they’re also good date spots. 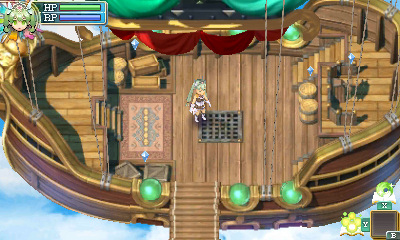 Above: Take to the skies!

“For story purposes, it does show the airship being used from time to time, but for in-game travel you approach a ‘transmitter’ right before the airship, which looks similar to a ship’s helm,” Avery told GamesBeat. “It’s like a teleportation device, so it’s quick and easy!

“Even better, you can later order that a furniture shop be opened and purchase more transmitters, placing them wherever you want. Because you can use the ‘Escape’ Rune Ability to teleport to your bedroom easily, you could theoretically place a telecommunicator in your bedroom and have an instantly convenient ‘teleport wherever you want, whenever you want’ device.”

Forming social relationships is a big part of many games, and sometimes, those friendships turn to love. Think about your chatty neighbors in Animal Crossing or the romance system in Fire Emblem: Awakening.

“What I love about Rune Factory 4 is that characters don’t just purely interact with you — they interact with each other constantly,” said Avery. “Not only is your relationship with each individual you meet going to grow by talking to them, inviting them to battle with you, learning their birthdays or their favorite things, and spoiling them with gifts — they gift back! — but you’ll see how their relationships with each other grow as well.” 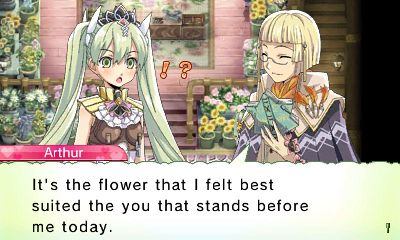 Above: What a hunk.

Players can court characters, go on dates as boyfriend and girlfriend, and experience events that deepen the relationship. (It’s possible to date the same sex, but it involves such a convoluted set of steps that our heads hurt before we even started to type them.) Rune Factory 4 is the first in the series to explore this feature fully and more realistically. Marriage follows for those who are lucky, but it’s not the final step.

“It’s very relaxing after that,” said Avery. “You can still go on dates together and even have a child — who can also join your party, meaning along with your husband/wife, you guys can have a family outing of kicking monster butt together. Did I mention how cool it is that if you’re the female protagonist, you can fight and farm while pregnant?”

This one is pretty obvious. The main element that Rune Factory borrows from Harvest Moon is farming.

“In the story, you’re thought of as an ‘Earthmate,’ a type of person who is in-tune with and can communicate with nature,” said Avery. “It’s a common theme in Rune Factory, and that’s why you’re given farms to treat the land. The healthier your farm is, the more little elemental-balancing creatures called ‘Runeys’ spread.” 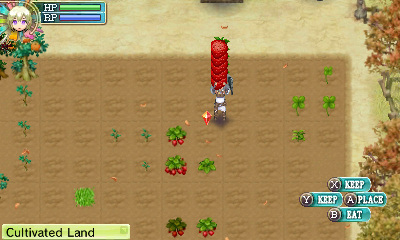 Above: What early farming looks like in Rune Factory 4. Harvest those strawberries!

Players can farm at their own pace, starting with cheap tools and then learning to forge better ones.

“You can plant vegetables, fruits, and flowers, which can be bought or found exclusively in dungeons,” said Avery. “There’s a specific tree that actually gives a tree-related seed once a day, so I would go there every day. I eventually had one farm solely dedicated to orange trees, apple trees, grape trees, and shining trees — ore!”

Completing requests from neighbors or visiting areas in different seasons grants access to new seeds, but players can also grow some … unusual (or even gigantic) crops, like swords, shields, and dungeons.

Because Rune Factory 4’s battles take place on the field, in a forest and grassy areas, with enemies that you can attack or ignore, it’s a lot like Chrono Trigger at first glance. But the actual battles are active, not turn-based, and involve action-heavy combat moves like in the Ys series of RPGs. Players can change the difficulty anytime for a casual romp or more hardcore experience.

“Battling in Rune Factory 4 is very fast-paced, and you’re given access to several types of weapons — short swords, long swords, spears, dual blades, gloves, axes/hammers, and staves — that have their own growth rate,” said Avery. “You can also use Rune Abilities, which function like magic spells; at first you can equip two, but you can unlock shortcuts to cast more on the fly.” 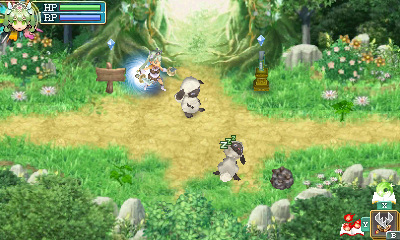 Above: Monsters can be befriended or fought.

Dungeons vary by season, and players can discover more than one during spring, summer, fall, and winter.

“The story spans a full three arcs, and so there are dungeons within seasonal dungeons, hidden areas that can only be accessed on certain dates or only if you like to snoop along the walls, hidden messages or scenes if you bring along specific items or characters, [and so on],” said Avery.

“There’s a lot of exploring to do, and inviting neighbors into your party can also help in making the journey of exploration easier. If you’re in the mood to find the unexpected, try inviting certain people to your party and then go back to areas you found suspicious — you might find something new.”

In Rune Factory 4, you can tame and raise monsters to help in battle, tend the farm, produce goods like milk or wool, or serve as mounts. Yes — mounts. Sometimes, you can even create new moves together. So it’s like Pokémon or Monster Rancher, if you remember that one. 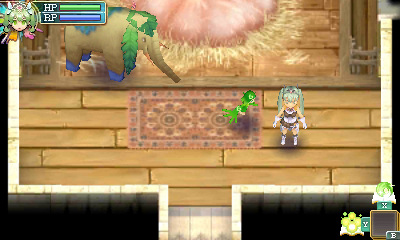 Above: Make sure to brush and love them daily.

“Monsters in dungeons can all be tamed as pets if you give them food or gifts that they like, and if you have a barn to put them in,” said Avery. “Not only can you keep ordinary monsters, but now you can tame boss monsters as well, though they’re pickier than the average. 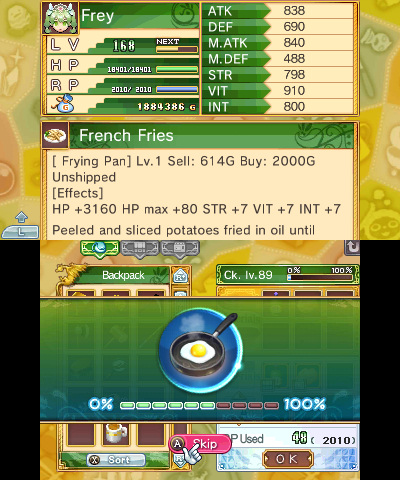 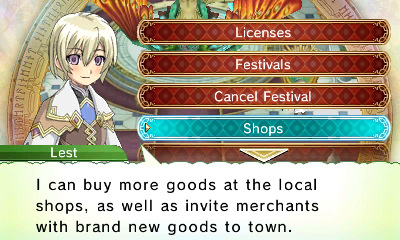 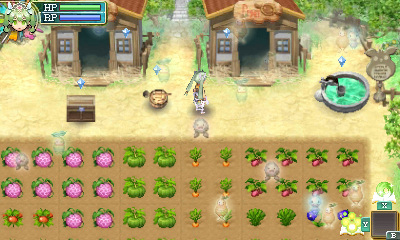