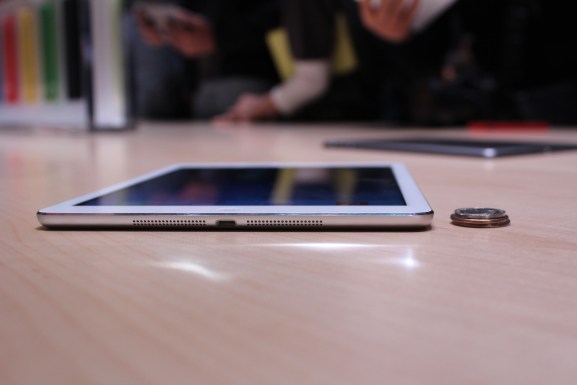 The iPad Air next to a stack of coins (two U.S. quarters and one nickel).

Apple announced a stellar lineup of new products today at a press briefing in San Francisco, and we got our hands on them for a few brief, precious moments this morning.

First impressions: The new iPad Mini, with its Retina display, is the tablet to beat. It’s the perfect size, small and comfortable to hold in one hand. The screen is vivid, and the pixels are nearly invisible. It’s as responsive and snappy as any tablet Apple has ever made. 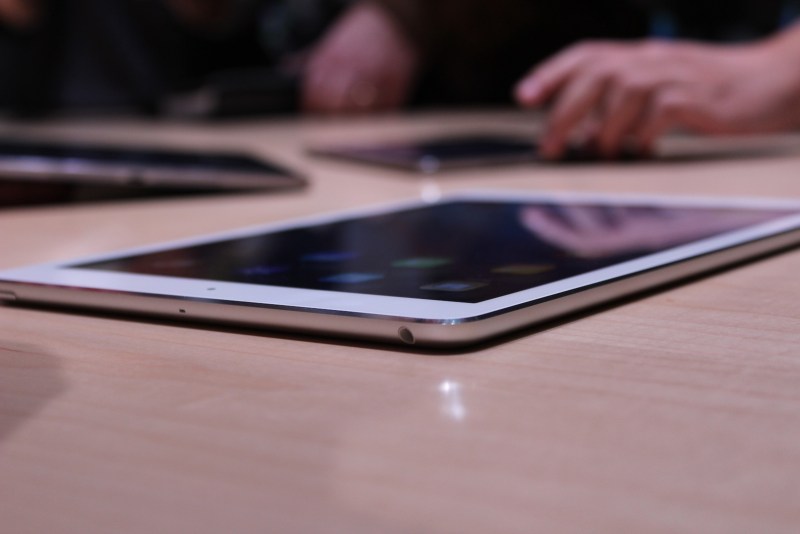 Above: The original iPad Air

The iPad Air is noticeably smaller and lighter than the iPad 2 — but only if you hold them side by side. This upgrade is probably the most impressive engineering feat Apple has pulled off in years, shrinking the thickness of the already-thin iPad by 20 percent. But the payoff is minimal. Yes, it’s thin and light. We all like that. But the device’s real attraction, the one that will convince people to buy it instead of the now $399 iPad 2, is its fast, 64-bit A7 processor. I couldn’t test its speed in any meaningful way today, however, so an evaluation of that will have to wait.

The MacBook Pros, both 13-inch and 15-inch models, look great. Spec-wise, these are impressive beasts. Their prices are even better than they were before. But outwardly, they look and feel almost identical to the old models. I couldn’t test or check much more in the 5 minutes I had with them.

The Mac Pro is perhaps the most surprising product of the bunch. I’ve seen photos of it where it looks huge and monolithic and a bit sinister. In person, it’s much smaller than expected: about a foot tall, and sort of cute. It’s smooth and reflective and quietly powerful-looking. The exploded model they had on display makes it clear that Apple has packed a lot of innovative new designs inside, including a triangular heatsink and what looks like a triangular layout of motherboards and daughterboards. The only obvious downside: That recessed dish in the top is going to collect dust and crumbs and cat hair — in my house, anyway. And the shiny column is probably going to be covered in fingerprints in no time. Keep a dust wipe handy.