We’ve been waiting for Apple’s new tablet for for almost exactly one year, less a day. Today in San Francisco, Apple took the wraps off its newest entrant in the global sweepstakes for control of the lucrative and growing mobile market.

And it’s not the iPad 5 we were expecting.

Instead, it’s the iPad Air, which took Apple years to make, taking every hundredth of a millimeter away from its size and weight. It now weighs just over 1 pound and has, Apple says, a much lighter feel. “This is the thinnest, lightest, and most powerful iPad we’ve ever delivered,” Apple design guru Jony Ive said in a product promo video.

The new full-size iPad Air has the same 9.7-inch display but a 43 percent smaller bezel, with a thickness of just 7.55 millimeters, which is 20 percent thinner than the previous generation. It also contains the new Apple A7 chip, which is 64-bit and doubles the iPad Air’s performance in opening files and rendering images. Apple also put a new 5 megapixel iSight camera that captures HD video, plus a new high definition front-facing camera, improved backside illumination, and dual microphones.

The price, however, remains the same: $499. And Apple will keep selling the iPad 2 at $399, offering a cheaper entry-point to Apple’s iPad experience.

Amazingly, Apple is launching in “lots” of countries simultaneously, with 41 on the list including one big new one: China. It’s the first time China has gotten iPad on day one of launch, Apple CEO Tim Cook said. Other countries include most of Europe, much of Asia, Australia, and of course the U.S. and Canada. iPad Air will ship on Nov.  1, making it available in plenty of time for Christmas shopping.

Apple is building on strength here.

“iPad has been one of the most successful products in Apple’s history,” Tim Cook said. “Early this month, we sold our 170 millionth iPad.” 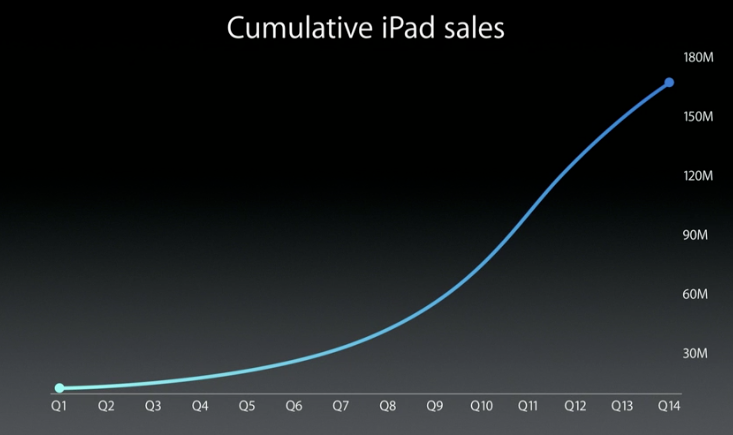 There are now 475,000 apps on the app store customized for iPad, but Apple is quick to say that it’s not about quantity — it’s about quality, with it’s unique blend of hardware, software, and services, which Apple’s says “no-one else can match.”

‘iPad is delivering a new vision for computing,” Apple’s Phil Schiller said. “This is what we mean by ‘designed by Apple in California,'” Cook added.