The age of the plastic guitars is over, thanks to the death of the fad-like Guitar Hero and Rock Band games. Now it’s time for the age of real guitars in video games. 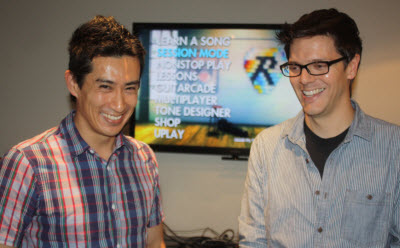 Above: Nao Higo and Nick Bonardi of Ubisoft’s Rocksmith 2014 team.

That’s the premise behind Rocksmith 2014, the second version of the guitar-learning game from Ubisoft. The French video game publisher launched its original Rocksmith in 2011 as a kind of experiment which allowed players to hook up their own guitars to their video game consoles.

The title focused on how fun it was for beginners to learn to play the guitar, and it sold more than 1.5 million units, just enough for Ubisoft to commission a sequel, which comes out today. The first time, Ubisoft was shy about saying the game was educational.

This time around, Ubisoft is emphasizing the learning, noting how it has become the “fastest way to learn guitar.” About 95 percent of the players said they learned to play the guitar from the game itself.

An independent national study by Research Strategy Group found that Rocksmith is the “fastest way to learn guitar,” partly because it tells you what you did wrong in a song and allows you to learn the way you want to learn. One of the reasons for that, Ubisoft believes, is because games can offer “adaptive learning,” where they can test your skill and then adapt the difficulty to fit your proficiency.

The goal is to take people who wouldn’t ordinarily be musicians and turn them into real guitarists. 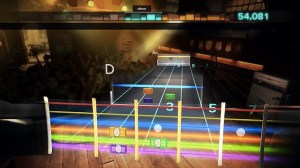 The trick, of course, is to do this without banishing the fun. That was one of the problems that came with the war between Activision Blizzard’s Guitar Hero and Rock Band by EA-Harmonix-MTV. They churned out new editions that had too little innovation. Gamers got sick of it, and they hung up their fake guitars.

The absence of that competition helped Ubisoft find the footing for its sequel over a couple of years. That allowed enough time for some genuine improvements. This time around, the load times are a lot shorter, said Nick Bonardi, lead audio designer for Rocksmith 2014, in an interview with GamesBeat.

“We made it faster, better, and listened to our community of users,” Bonardi said. “We take people who don’t believe in themselves and make it so they can say, ‘I can do this.'”

One of the keys to making it fun is to allow the players to learn the guitar the way they want to learn it, with their own chosen songs and their own lesson order. There are 85 lessons on the disk, from how to use the strap to two-hand tapping. Those lessons all come with video content, telling you exactly how to do something. You can do those lesson in whatever order you wish.

“Once you watch the lesson, we see if you learned it,” Bonardi said. “It taught you how to play a bend. Now you do it. If I pay the wrong note, it says you’re on the wrong thread. We cover all of the fail cases. We give you advice, much like a guitar teacher would. Then it puts it in context.”

You can use Rocksmith 2014 with any real guitar or bass with a standard quarter-inch jack. You just plug it into your Xbox 360 video game console, Sony PlayStation 3, PC, or Mac. Ubisoft has a list of 55 songs that are included such as “Every Breath You Take” by The Police and Aerosmith’s “Walk This Way.” The game ships either on its own or with a cable in a bundle.

The downloadable content songs bought for the original Rocksmith will be compatible with Rocksmith 2014 at no extra cost. Full told, there are around 400 songs available.

The new game has a number of features including Automatic Tone Switching, Articulation, Timing, and Instant Riff Repeater. The Riff Repeater lets players select any section of a song they want to play, and repeat that section over and over until they master it.

Those are things that more sophisticated players will like. But they’re designed better. For instance, this time around, the Riff Repeater is easily accessible, whereas it was hard to get to in the first game because it was hidden behind menus.

The Guitarcade has fun mini-games. They are designed to take the intimidation out of learning.

The games allow you to hone specific guitar skills. One is Star Chords, which is like a 3D Star Wars style space combat game where you shoot at space ships by strumming the right string. You can see where you stand on the leaderboards in fulfilling various parts of the game.

Another game has you shooting at ducks. It seems simple, but it teaches you to navigate up and down the fret board. So when your solo comes up the next time around, you can get your fingers to the right part of the neck a lot faster. There are 11 mini-games for things like chords, sliding, scales, harmonics, and dynamics.

This gamifies the lessons so that practice isn’t just a pure grind.

Each song now has a results screen, with all of the information that you need to know to get better at the song. You get the percentage of the song that you got right or the sections where you did best.

“This was based on the feedback we received, Higo said.

For more advanced players, the game has a lot of depth. With Tone Design, you can go in and grab any amp you want to fine-tune the music experience. Ubisoft has licensed all of the real amps from the manufacturers, so the sounds you can produce will sound realistic. 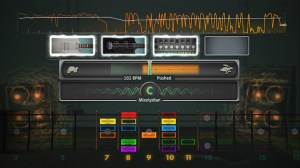 In Session Mode, you can lead a computer-controlled band that plays along with you and follows your lead in an intelligent way. In the process, you can learn to improvise and create your own music. It’s more fun than playing with static backing tracks or a metronome.

“When we finished the first game, one thing we wished was to have a space where someone could improvise,” Bonardi said. “That is what Session Mode is. We created AI musicians to play with you. If I play really quietly, the drummer will follow me. Or if I play more intensely, the drummer will do that and play a lot louder, as a musician who is listening to you would do.”

You can do this with a whole group. Jerry Cantrell, lead guitarist and vocalist for the band Alice in Chains, is a believer in Rocksmith, which he said could make him a better musician. He said that Rocksmith’s Session Mode feature is a real innovation in music technology as it gives you the experience of a band that adapts to you. At the E3 video game trade show, Cantrell was playing with the Session Mode just for fun.

Session Mode has a lesson plan built into it, but it’s not as formal.

But the Session Mode isn’t mechanical.

“We tried to make the AI seem human,” Bonardi said.

You can also jam side-by-side with a friend in multiplayer mode, and create your own band experience in your living room.

With these features, people can start to learn concepts such as harmony or dissonance, Higo said.

“The goal is to transition someone who has learned an instrument into a musician,” Higo said. “They can understand what they need to play and make their own music. It helps broaden our reach beyond the beginners. We do that well, but we follow them on that journey to make them intermediate musicians or better.”

Will this lead to a revival?

Laurent Detoc (pictured right), president of Ubisoft North America, said in an interview with GamesBeat, said that the music market is “in need of a rebirth, so to speak. The reason we got into Rocksmith to begin with was because, seeing all of these instruments made of plastic being played, and having a few guitar players among us, we were thinking about the power of this. What if you could just hook up a real guitar and have people make better use of their time?”

He added, “The appetite for being a rock star exists. It’s always been there. That’s why Guitar Hero and Rock Band did well. I would hope that the improvements that we keep making to Rocksmith – both as a brand as a method for helping people learn the instrument – can take us to a point where we’ll be the natural evolution of those games on the same scale. We’ll still cater to that market of people who want to be rock stars.”

The key is to make the learning fun.

At the same time, Rocksmith 2014 adds some discipline. Ubisoft has issued a 60-day challenge where it asks players to play for an hour a day for 60 days to see if they can really learn the guitar in that time span.

The title offers mini-games that teach you some things that aren’t as fun to learn.

Is it real learning?

Can all of this really teach you to play the guitar? And is the market an education market or an entertainment market?

Detoc said, “It’s both. That’s the thing. Our media today are so flexible and powerful that we’re able to let people do things they couldn’t do with media before. If you take classes on the Internet, you can get a degree now. People are going to have to figure out how to deal with that now, because watching MIT courses online probably isn’t the same as going to MIT, but what’s fascinating is that now we can think of all these different possibilities as a result.”

He added, “Today a piano teacher comes to your house. But you could also take piano lessons from YouTube now. Rocksmith gives you this additional step where the teacher is in your TV, because the program adapts yourself to how you’re doing. Can you do that with any other media? Not really.”