During its iPad event yesterday, Apple went out of its way to not only attack devices like the Surface but also go after the company’s approach to operating system upgrades and productivity software.

Today, Microsoft is striking back, and it’s taking the very same direct approach that Apple did. In a post on the official Microsoft blog, communications VP Frank Shaw railed back against Apple, which he argues has extended its reality distortion field beyond Cupertino.

Defense 1: Unlike the iPad, the Surface is a work machine

While Apple CEO Tim Cook might argue that hybrid devices like the Surface are a sign that its competitors are confused, Shaw says the Surface’s hybrid approach is actually its biggest strength.

“[The Surface] is single, simple, affordable device that helps you both lean in and kick back,” he writes.

Translation: When Microsoft gave the Surface both a touchscreen and a physical keyboard, it wasn’t because the company was confused — it was because Microsoft knew exactly what people wanted in tablets and was responding to that.

In other words, the Surface is meant to be for work and play. Apple, Shaw argues, can’t say the same thing for the iPad. 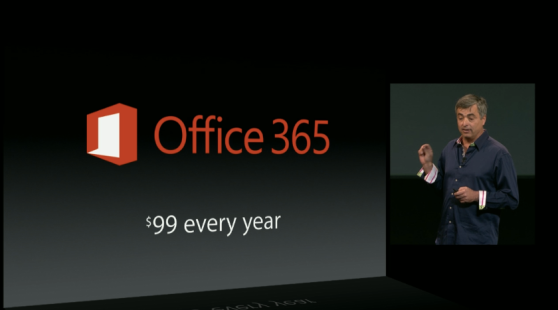 This, Shaw points out, taps into another one of Microsoft’s traditional strengths: As the history of Windows and Office shows, Microsoft understands productivity better than just about anyone else. (Or so it claims.)

“We created the personal computing revolution by giving people around the world a low-cost, powerful, easy-to-use device that helped them accomplish an unbelievable array of tasks,” he writes.

Microsoft, it seems, is drawing the line in the sand: While Apple’s tablets may be good for burning time, Microsoft’s approach the tablets make them better for both burning time and actually getting work done.

Defense 3: Apple’s approach to productivity software is ‘watered down’

Shaw, also uses his post to take a few shots back at Apple’s iWork productivity suite, which he says is “watered down” compared to Office. (Presumably, this is also how Microsoft justifies charging $99 a year for a subscription to Office 365. You get what you pay for, right?)

More, Shaw also downplays the significance of Apple’s decision to make iWork free, a move he says wasn’t surprising or significant because not many people were using iWork to begin with.

“So, when I see Apple drop the price of their struggling, lightweight productivity apps, I don’t see a shot across our bow, I see an attempt to play catch up,” he writes.

Overall, a few things should be clear from the above: