A supposed Portuguese-language Xbox One manual leaked to Brazilian website UOL today (as spotted by NeoGAF user Kazebyaka via Polygon). The installation guide shows Xbox One owners how to plug in the console to a television and how to put batteries into the new Xbox One controller.

The manual also details where gamers can put the new Kinect motion-control camera.

The guide notes it can sit up to about 2 feet below the TV screen or up to 5.9 feet above it. The guide also notes that the Kinect camera needs to sit at least 4.6 feet away from where you are sitting or standing. That’s a bit closer than where you must stand for the original Kinect to work. That device needs about 6 feet to 8 feet of minimum distance. 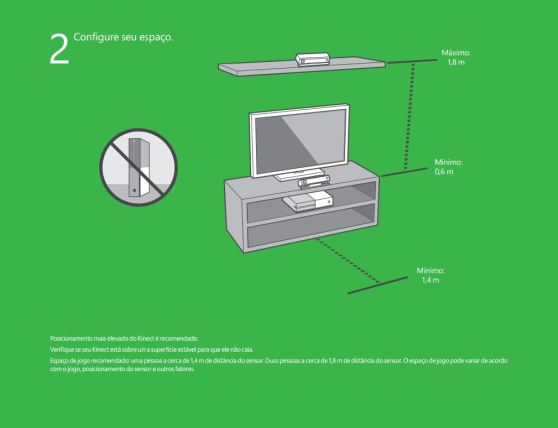 Above: The Xbox One manual’s guideline for Kinect placement.

We’ve reached out to Microsoft to ask if this is the real manual. The company would only provide a “no comment” on the authenticity of manual.

Xbox One is due out Nov. 22 for $500. That’s $100 more than the PlayStation 4, which doesn’t include its motion camera. Many gamers who don’t want the Kinect are annoyed that Microsoft is bundling it in and not offering a version of the system without the camera.

Microsoft’s original Kinect was an add-on peripheral that sold well, but it still never quite caught on with a mass audience. That meant the company couldn’t fully support it since most gamers still don’t have one.

For Xbox One, Microsoft improved the Kinect with better cameras and sensor technology.

“The new Kinect for Xbox One delivers 10 times more power and is incredibly advanced technology,” Isaac said in an interview with Microsoft’s Xbox news service in August. “It can track even the slightest motions and gestures with pinpoint accuracy, like the simple squeeze of your hand to give your wake racer some gas in the Wake Racing [minigame for Kinect Sports Rivals].”

Microsoft also intends to use Xbox One’s Kinect as the centerpiece of its media-control functionality. By plugging a cable or satellite box into the Xbox One, gamers can simply say “Xbox, watch ESPN” to switch to the channel. That’s why the company is charging more and including the Kinect — it wants the device to become the primary way people interact with the media on their television.