How they rest on a surface:

We’ve heard horror stories from Dark Souls players who have made huge mistakes in the unforgiving action role-playing world simply by setting the PS3 controller down. Because the L2 and R2 buttons are just so exposed and out there, resting them on the table or on your lap can depress them, causing, for example, your hero to take a huge swing of his sword and permanently kill an innocent but vital nonplayer character.

Of course, Dark Souls isn’t the only thing to have relationship issues with the shoulder buttons. “When we discussed what people hated about the DualShock 3, the very first thing was always that, when you put the controller down, it fast-forwards your Netflix,” said Aoki with a laugh.

The Xbox 360 controller avoids this problem by having some of its plastic back creep up underneath to envelop the bottom of the triggers, preventing them from touching a resting surface.

The PS4 controller doesn’t quite have that same level of protection for its L2 and R2 buttons, but it is an upgrade over the PS3. The bottoms of the triggers are level, so they rest squarely on flat surfaces. Unlike with the DualShock 3, if you set the DualShock 4 on your coffee table and push straight down on it, it won’t cause the L2 or R2 buttons to depress (we’ve tried). If you push it down and forward, however, you still have the potential to activate those triggers by accident (a little more than with the 360 controller since the tips here can catch on, say, the carpet more easily without that extra layer of plastic underneath). 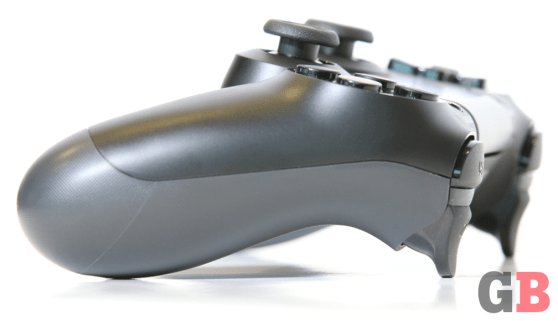 Above: The L2 and R2 buttons have a flat tip, helping to prevent accidental presses.

Ever notice that the PS3’s L2/R2 are a bit squishy? “I don’t know how to describe them,” said Aoki of those buttons. “Rubberish? When you press the R2 on the DualShock 3, it has that mushy feel. Of course we wanted to fix that, but also keep [racing game Gran Turismo developer] Polyphony’s request of being able to get that linearity in the stroke.”

This means pulling on the DualShock 4’s triggers gives you a smooth resistance from start to finish. Overall, it feels slightly stiffer compared to the DualShock 3, too, but the consistency through the full range of motion is tangible and doesn’t feel like you’re pinching a rubber ball.

This, however, leads to other engineering considerations. At what point during a pull of a trigger, for example, does the controller start sending signals to the PS4 console? This may not seem like a huge issue, but it matters a lot to the people making the games. “How far you have to push it in for it to register and how fine a detail can you get back as a developer?” said ter Heide, when we asked what he wanted out of the new L2 and R2 buttons. “For example, the guys from Evolution [Studios, a racing-game studio that’s making Driveclub for the PS4] said that they wanted to use it for throttle and that sort of stuff, so they need finer control, whereas we use it more as a trigger [in Killzone: Shadow Fall]. So how do you find the right balance, giving it just the right stiffness and the right amount of feedback so players understand what’s happening? That was just going through a lot of prototypes, figuring out what felt right and what made sense.”

Another small detail: All the shoulder buttons are more clearly branded now, with the lettering even facing the opposite way than how they appeared on the DualShock 3 — probably thanks to one guy. “I pushed really hard to turn around the markings on the L2 and R2 and L1 and R1 buttons,” said de Roos, “so you can actually read them when you turn the controller toward you.”

Above: Now the shoulder-button icons face the right way when you’re holding the controller.