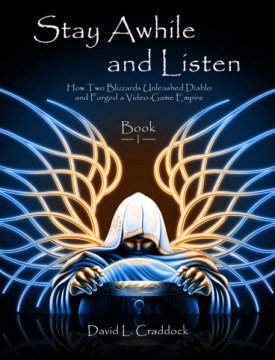 Above: The full cover for Stay Awhile and Listen – Book 1.

What you probably don’t think about as often are the faces — the people behind Diablo and the story of how they created a legend from a relentless, unforgiving love of gaming. Stay Awhile and Listen: How Two Blizzards Unleashed Diablo and Forged a Video-Game Empire (available for $10 on Kindle, iBooks, and Nook on Oct. 31), the first volume in a new series on Blizzard’s history from Digital Monument Press, gives voice to both.

Author David L. Craddock focuses on the rise of Blizzard North (formerly known as Condor) and the birth of Diablo. He also dabbles in the origins of Blizzard Entertainment (previously called Silicon & Synapse and later Chaos Studios) and the first Warcraft game. This section appears in the middle of the book, and it’s a necessary distraction. You can’t fully appreciate one studio without the other.

Reading Stay Awhile and Listen is like a mountain climb: You know Diablo is at the top, and it’s in sight every inch of the way, but you’ve got a long way to go before you reach the summit. Blizzard North cofounder Erich Schaefer etched the beginnings of Diablo on a piece of paper years before it became a game. The idea budded from a love of Dungeons & Dragons and early roguelikes, and it evolved later, when X-COM: UFO Defense fascinated the team and influenced Diablo’s early design. 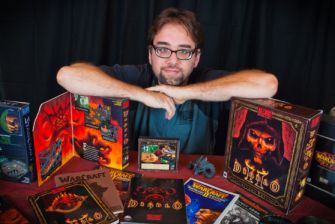 Above: Author David Craddock posing with some Blizzard memorabilia.

To understand how Diablo became such a momentous game, you have to learn about the people who made it. Erich founded Condor with his brother Max Schaefer and friend David Brevik, who once lived near the base of Mount Diablo, a landmark east of San Francisco Bay that inspired the famous name. They mostly taught themselves their craft, learning to program games on the Apple II — a devotion to the medium that they didn’t quite know what to do with. As proof of that indirection, they ended up at clip-art company FM Waves but managed to steer that work into making games: an obscure title called Gordo 106 that died with the Atari Lynx.

Brevik departed due to company paycheck troubles and joined Iguana Entertainment, where he failed to convince the company to take on a home-console port of a game that would hit it big: Mortal Kombat. The team never made the mistake of doubting his judgment again. That’s what the three founders of Condor had in common: a real eye for what made games fun.

Eventually, the trio found their way back together to start Condor, where they worked on several games just to keep the lights on. The most notable (besides Diablo, of course) is probably Justice League Task Force, which started the whole “Superman can’t kick” story over DC Comics’ overbearing rules about what could and couldn’t be in the superhero-fighting game. As if through destiny, Justice League Task Force brought Condor and Blizzard Entertainment together. They had no idea they were making different versions of the same game.

Without Blizzard Entertainment, Diablo, which saved computer RPGs from stagnancy in the 1990s, would have been turn-based, not real time. Without the passion to put quality first, Battle.net would never have been free and different from the other online multiplayer services available. Multiplayer may not have even happened at all.

Diablo was special for other reasons as well. It was one of the first titles on Windows 95 and one of the first to use Direct X, so Microsoft paid millions to promote a demo, which got people playing and magazines to take notice. Alongside it, a limited beta test of Battle.net spawned a rumor around which a whole community of fans formed: the cow level.

Blizzard North’s closeness as a group of friends meant successful collaboration, and its relaxed work atmosphere meant it was always riding a creative high. It fed all of that energy into Diablo. Later chapters of Stay Awhile and Listen explore its development and explain how all the iconic features — Deckard Cain, the gothic-horror style, the music, and even those irresistible little piles of gold — came to be.

The beauty of Stay Awhile and Listen is the format and language. Craddock splits the book into a few parts. Aside from the main chapters, the “Side Quests” act as endnotes — really, extra material that didn’t quite fit with the central text — that readers can access by clicking special markers on each page. Because it’s an e-book, they can then click to go back. It’s quick and easy. Finally, you have a reason to care about what’s in the back of the book. 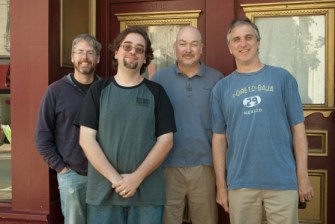 The same can’t be said about the “Bonus Rounds,” which expand on people, events, and games covered in the book but are not directly linked with the main content, so you have less incentive to want to read them. With a couple exceptions (Craddock sneaked in an intriguing section about features that didn’t make the cut into Diablo), they mostly take the form of extended interviews and lack the eloquence of Craddock’s normal format: the splicing of straight text with block quotes, which makes each page inviting.

His language is equally as accessible. Craddock never bogs the prose down with the excessive delivery of dates, names, or numbers that makes other books on the history of video games so laborious. It’s not a chore to tease apart the facts from the message. Stay Awhile and Listen is a story, not a textbook or encyclopedia.

It helps, too, that it examines the people involved, not just what the work that they did. Craddock takes his time introducing each person, and by the time he explains their contribution, I felt like I knew them as human beings, not as developers — what they were like as kids, where they came from, and what their aspirations were.

That’s really what the two Blizzards represented and what attracted newcomers to their teams: passion, not suits. They were gamers who kicked back in jeans and T-shirts, not businessmen, and that’s what carried them forward.