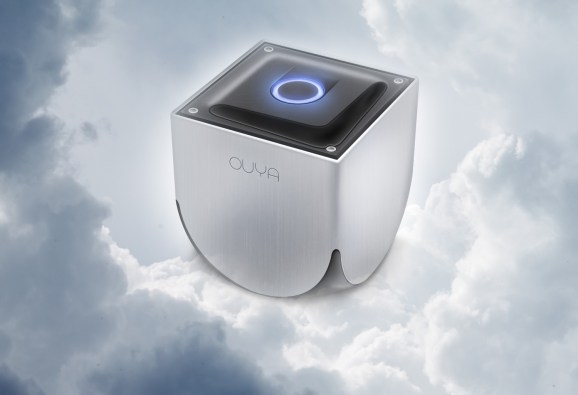 Ouya is in talks with "all" the cloud gaming providers

The Ouya’s future looks cloudy — and may come in a variety of consoles.

Ouya CEO Julie Uhrman is talking to “all” the cloud gaming providers to bring flashy, triple-A experiences to Ouya’s Discover online store — which may not always reside on an Ouya box. (More on that below.)

“There is absolutely a role for cloud gaming on Ouya,” Uhrman told GamesBeat in an interview Wednesday. “It would bring content to Ouya that our hardware may not support today, but that will play wonderfully — and were built to be played in the cloud.”

Ouya forged an early partnership with OnLive, the once-promising cloud gaming service (the company fell apart and declared bankruptcy last year). Scooped up by Lauder Partners, OnLive is still in operation, but it’s no longer a leader in the sector, prompting Uhrman to begin speaking with other cloud gaming vendors.

Asked which ones, Uhrman replied, “All the ones that you’re thinking.”

We can think of a few: Playcast, which has partnerships with major publishers like Capcom and Atari; G-cluster, which cut a deal with Electronic Arts in August; and Kalydo, which offers progressive downloads ideal for massively multiplayer online games.

“There’s a lot of middleware providers today, and there’s a lot of folks that have relationships with the content, so it’s really just based on the type of content that we want to bring to Ouya and who has the best solution,” she added.

Encouragingly, Uhrman appears to understand that (at least today) not all games work well in the cloud, especially for gamers with tenuous Internet connections. She’ll prioritize less twitchy content, like RPGs and strategy games, over action games and shooters.

“There are certain types of games where the idea of cloud gaming will work, but there are other types where it absolutely will not work,” she said. “I think we think about it the right way and we’re excited to test it out with some partners.”

The new Ouya is coming in 2014, but it may not be the next device to play Ouya games.

Uhrman can envision a future where her company’s box isn’t the only piece of hardware to offer Ouya’s Discover online store. She’d welcome the opportunity to offer the storefront on other devices as long as other hardware makers matched Ouya’s internal specifications, keeping things simple for Ouya developers.

“What’s most valuable about Ouya is the community and our relationship between gamers and developers,” she said. “And the Ouya storefront is [also] of great value.

“So, yes, if there is a partner product on the market with the exact same specifications — so there’s no fragmentation for the developer — would I be open to putting the Ouya storefront on it? Absolutely. But what I don’t want to do is fragment my audience of developers and make things harder for them.”

While third-party gaming hardware doesn’t always hit the mark, Uhrman’s openness presents a viable opportunity for outside parties to fix some of Ouya’s early issues before the company itself gets around to it. That, in turn, would help gamers stop battling the console and controller, and focus on what really matters: the games.

Stay tuned to VentureBeat for our full interview with Ouya CEO Julie Uhrman.