Killzone: Shadow Fall is one of Sony’s big bets to woo gamers to the new PlayStation 4 home console this holiday season. The sci-fi shooter from Guerrilla Games is a launch title coming out (at the latest) on Nov. 15 when the PS4 launches in North America.

Shadow Fall takes place 30 years after the events of Killzone 3, and it features the continuing conflict between the Vektans and the Helghast, two rival colonist factions inhabiting a distant planet. In this scenario, both factions have been living side-by-side, separated by an enormous security wall, for three decades. But now their cold war is about to get hot, and we got the briefing on why from lead designer Eric Boltjes in an interview at Sony’s U.S. game headquarters in Foster City, Calif.

Among the twists in this game: You will be able to start out in multiplayer with access to all the weapons in the game. Life is too short for leveling up, Boltjes said.

GamesBeat: It seems pretty unusual to have so much available for you to shoot with at the beginning. You say that you’ve basically opened up everything in the multiplayer at the very beginning. Why did you take that approach? 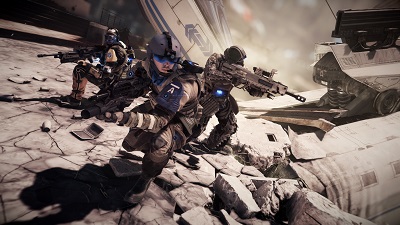 Eric Boltjes: We want people to be able to pick up our game and instantly start playing how they want to play. For me, I’m more of a support type of player. I like to revive my friends. I’m not a very good shooter. I’m going to stay in the back. In a lot of games, you have to invest a lot of time in order to be able to play that way. We said, “No, we don’t want that. We want people to join, on day one or a year in, and play how they want.”

In single-player, it’s more structured, though. You’ll get more abilities as you play along and so on.

GamesBeat: In multiplayer, then, you’re earning different kinds of things. You’re meeting challenges and ranking up. What does that do to the multiplayer gameplay?

Boltjes: We start out with a level playing field, but what we wanted to do is allow people to become better at their playstyle. As you unlock challenges and so on, you do two things. One is that you kind of specialize. The guns are unlocked from the start, but when you complete new challenges, you get new scopes, you get new secondary fire options, things like that. You can tailor a weapon more toward how you want to play. The same goes for abilities. You can unlock improved versions of abilities. The core abilities are unlocked at the start, but you can get improved versions as you complete challenges.

GamesBeat: Are you finding that people are choosing the most powerful weapons at first, ignoring anything that’s not as powerful?

Boltjes: We’ve spent a lot of time on creating a balanced spread of weapons. We’ve playtested — I don’t want to give a number. But it’s a lot. We’re a shooter, so the most important thing is weapon balance. We can never 100 percent guarantee that it’s fully balanced, because there are always people who figure out a way to exploit something. But the good news is, this time around, we can change weapon characteristics on the fly, without releasing a patch or anything like that. Postlaunch, if we see that there is an exploit, we can do two things. Either the community can turn off the weapon in their custom warzones, or we as a developers can tone it down on the fly. We’re going to look at the community, see how things develop, and react as we go. 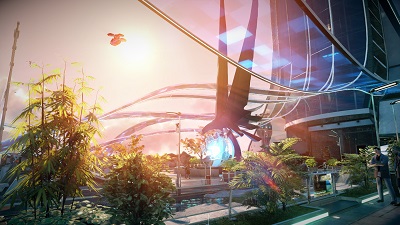 GamesBeat: Allowing for those kinds of modded maps to be shown front and center, the custom warzones, is that something you’ve moved toward over time, or is that a significant departure?

Boltjes: We want to give power to the players. Rather than saying, as a developer, “Everybody go play this”—all different people want to play different things. Why should we limit them? That’s the power of what we’ve tried to achieve. We said, “Hey, build whatever you want. We’ll help you make it popular and find other people to play against.” It’ll be interesting to see how that pans out.

GamesBeat: You have a bit of a cold war theme in the story here. Have you worked in a lot of parallels to the historical Cold War?

Boltjes: We take inspiration from real-world events, yeah. Berlin had the Wall, for example. We have a city that’s divided by a wall. It’s an interesting part of history. I think it’s an important theme to look at. Who is the bad guy in this war? It’s always a gray area. Innocents always get hurt. I think it’s important to expose that in the game. It’s an interesting theme to work with.