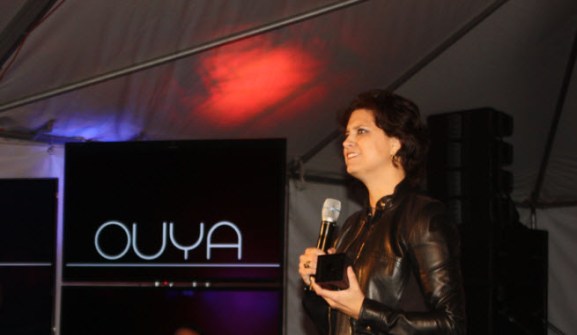 In one of her first interviews since launching Ouya, the Kickstarter-darling Android game console, chief executive Julie Uhrman tells all.

We sat down with Uhrman at our New York City office to explore the difficulties of the console’s launch (reviews weren’t so kind, including ours), Ouya’s role in the gaming world, and where things are headed. She revealed that cloud gaming is coming to Ouya, and that she’s not opposed to third-party consoles.

But the biggest takeaway: Any setbacks Ouya faces only makes it stronger.

[Uhrman is also one of the top speakers at our GamesBeat conference next week. Grab your tickets now!]

GamesBeat: What’s next for you? You have the launch set, you have the holiday season coming up, and there’s some next-gen competition coming.

Julie Uhrman: We continue to improve. We think about our company very differently, even though we’re a hardware and software and platform company. … We develop as if we’re a software company, so we’re iterating all the time. Every single month, we have new releases of functionality; we’re always improving the experience and making it faster. Last month we launched our beta test for external hardware, and we added video to discovery and additional discovery feature that are more personalizable.

Q4 is looking really good. We’re increasing our distribution footprint. We’re growing in Europe and the Middle East. … We’ll also be expanding it in the U.S. And the content’s great. When we launched back in June, we had 176 games. Today we have almost 500. … And we’re nearing on 26,000 developers.

The breadth of content is also really exciting. Every genre is represented … we’re just starting to see a bigger diversity in the developers on our platform. We’re pushing hard to get Fez from Phil Fish on the platform; Double Fine is coming out in the first half of next year with Broken Age and The Cave. We have the exclusive Android version of [Telltale’s] The Walking Dead season 1 and 2, with the first releasing this year.

GamesBeat: What have you learned from the launch?

Uhrman: For one thing, Ouya wasn’t built behind closed doors over years and years and released to the market. There are some things that we released were great, and there were other things that weren’t great, and we needed a larger audience to sort of point that out. But because of how we’ve built the company and how we develop, we can iteratively improve the product — push additional firmware updates, push additional software updates. So if there’s latency and lag in the controller, we’ve been able to push updates that improve the experience.

I think the one thing about Ouya is that feedback is incredibly helpful, because it helps makes us better, and we get better on a monthly basis. So there’s always a reason to continue to come back to Ouya, not only to check out the experience, but to check out the games. …

They’re just fun — I know it’s an overused word, but that’s what our gamers are calling it. They’re having fun playing again. They don’t have to overthink it; they don’t have to go through 20-40 hours of gameplay or go through an extensive tutorial. … They can literally just pick it up, like we used to for Super Mario Bros., and they know what to do.

GamesBeat: It seems like a callback to older arcade games.

Uhrman: That’s resonating. Ouya was never meant to compete with traditional consoles. We’re carving out our own niche. We’re offering something very unique in the marketplace, the idea of inventive and innovative games on the television that can come from any developer because we’re open. And we really believe in giving creative freedom to creators and lowering the barrier for gamers to try new developers and try new types of games. We’re the only open gaming platform on the television, and it’s resonating really well.

GamesBeat: Do you take some credit for kicking off the Android microconsole craze?

Uhrman: Absolutely. The market didn’t exist before Ouya, and we’re definitely the leader in the space, with the largest and most loyal community of gamers. … But it’s hard. And I think we’re seeing that also. It’s not easy to launch a new hardware platform and software platform and to develop a community of people that care. I always joke that it’s not called hardware for nothing — it’s possible, and it’s doable. But it’s hard, and it’s certainly hard to get right.

Our path to market — which is to be open, to put it all out there, and be willing to accept at times that it may not be perfect, and to say that “we made a mistake, and we’re fixing it” — is also not easy. But we think it makes it better, and being open is really core to who we are and what we are. And I think our audience really appreciates it.

GamesBeat: Who is the Ouya audience? And do you expect to see that shift as the console and platform evolve?

Uhrman: I think platforms evolve based on the type of content that they get, and the developers that embrace them. Our early audience is definitely the core gamer, the guys who want to be the new adopters — the gadgetphiles, the makers, the hobbyists, and the hackers. And we still have that audience as well as that independent game audience, where it’s not about playing a [first-person shooter] for 40 hours with 10,000 of your friends online … they want to play more story driven games, or games from developers that maybe only lived on mobile, like Vlambeer with Super Crate Box. That game is amazing on Ouya, because it feels like it was built for a controller, to be played on a television.

The other thing that’s been interesting to us, is that we’ve definitely had sort of a mass market following. Target has really embraced us as a retailer, and their audience has really liked Ouya. One of the first updates we added to Ouya was age-gating and parental controls, and that came directly from our audience.

GamesBeat: Are you worried at all about everything Valve is doing with SteamOS? It’s very different from what you’re doing, but it’s also about bringing PC gaming to the living room.

Uhrman: I think it’s great for developers. The more platforms and channels that developers have to get their games to gamers is wonderful. What fundamentally sets Ouya apart is that we’re open to all creators. We really want to give the the creative freedom to develop the game they want to develop. They don’t need our approval to launch on Ouya. They don’t need a ton of gamers to say “Yes, we want that game!” If they believe in their game, and want it on the television, it can be there.

I’ll give you an example: One of the games on Ouya today that’s very popular is Amazing Frog by Fayju. It’s this frog that runs around, and you get points by doing tricks from jumping in the air. There’s no beginning, middle, or end. There’s no real point to the score. But it’s fun, and it’s silly, and it’s enjoyable. And that game doesn’t fit any typical genre. In fact, that game is really hard to describe and get someone excited about. You actually have to experience that game. … The majority of people on Ouya downloaded this game and love it. … It’s games like that where the promise of Ouya is playing out.

That’s what makes Ouya so great — games like that can find a home and find an audience. Whereby, if you had to rely solely on describing the game and what the story was … If those things don’t fit into the conventional descriptions of how we think about a game today, it would never have a chance. … That’s what they [Fayju] said. They didn’t have a home until Ouya, because nobody got it.

[Developer] Ryan Green is working on That Dragon, Cancer, which is a game about his family’s struggle with his 4-year-old son’s cancer. … It’s a very heartfelt, emotional story, and one might question how it’s a game. But he wants to share this experience with gamers, but more importantly he wants it to be a shared experience. The only platform that really provides for a shared experience is the television. That’s a game that would struggle to get on platforms, because it’s not going to sell millions of consoles, and it may not sell tens of millions of units. And we don’t care about that. We care about a great game and story that needs to be told. And we think gamers will really enjoy it.

GamesBeat: Are you breaking open the concept of a game, too? It used to be about all graphics and gameplay.

Uhrman: The answer is absolutely, and the reason for it is Kellee Santiago. She’s our head of developer relations, and she was co-founder and president of Thatgamecompany, which created Flow, Flower, and Journey. She helps us think about games differently. … She has us look at more than just the action of the game, but what’s the storytelling, what are the emotions it’s trying to evoke, and really help us see that there’s more to games than the genre that describes it. … We have games like Luxurious Suburbia that’s come to Ouya, that are just different, but should be experienced.