Miami-based web entrepreneur Jose Vargas is sitting pretty. The domain he purchased seven years ago for a little over $2 million is now one of the most lucrative web properties on the Internet.

That domain is Healthcare.com, which hundreds of thousands of people rushed to by accident on Oct. 1, when the United States government launched its online health exchange — at a very similar domain.

“We generated over 100,000 quote requests in October, and since HealthCare.gov launched the site traffic has increased 10 times,” said Vargas, who owns the site with business partner Matias de Tezanos.

Traffic to Healthcare.com is still strong, but has resumed to more normal levels. Most people have learned by now that the government-run domain is actually HealthCare.gov.

Business is booming for Vargas, but the feds have been caught in a media firestorm since HealthCare.gov launched three weeks ago. HealthCare.gov has been plagued by technical defects, including delays and error messages. President Obama tried to assuage fears and partisan conflict Monday by promising that a “tech surge” will fix the problems.

While the makers of HealthCare.gov are now facing congressional hearings, Vargas is laughing all the way to the bank.

“All this traffic to the site has meant we have far more interest from advertisers,” said Vargas in an interview. 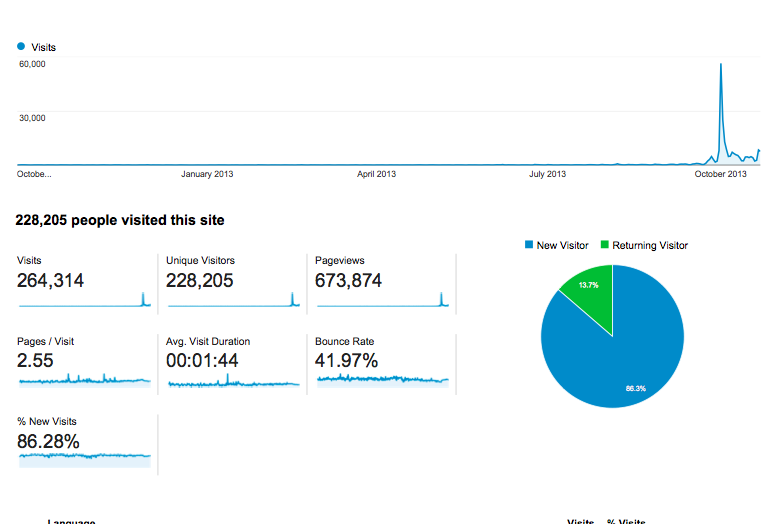 Above: Healthcare.org: From almost 0 visitors to 60,000 overnight.

On Oct. 1, Healthcare.org received a spike in traffic from almost zero unique visitors to 60,000 overnight.

With the sites performing well, Vargas has received phone calls and emails from the press. Reporters have accused him of squatting on these highly lucrative domains.

But Vargas and his partner stress they they are serious entrepreneurs. They have developed and sold several Internet companies, primarily in Latin America.

Back in November 2006, Vargas had never heard of Barack Obama, or had much experience with health care. But when a banker called his business partner de Tazanos inviting him to place a bid for the domain, they jumped at the opportunity.

“We are not healthcare guys, we are online marketers” Vargas told me. “But we knew that health care accounted for more than 26 percent of the U.S. GDP.”

So de Tezanos made an offer for Healthcare.com, and won. The goal was to build out health-related content and develop a competitor of sorts to medical information site WebMD.

By 2007, Vargas secured a trademark for Healthcare.com and raised over $6 million in seed funding to execute on this vision.

Since then, the mission for the site has changed significantly. Today, Healthcare.com offers health insurance quotes and advice.

Vargas sees a wide open opportunity for the site and has paid close attention to recent legislation and reforms. He also believes that entrepreneurs can take advantage of the Affordable Care Act in unexpected ways.

Vargas has a different business model in mind for Healthcare.com. He understands that the Affordable Care Act prohibits insurers from denying people insurance based on pre-existing conditions. However, these insurers are hoping to keep costs down by registering healthy people, who rarely get sick.

Healthcare.com’s founders will reach out to insurance providers, and offer them opportunities to target advertising to young and able-bodied folk.

“Insurers can’t deny anyone, but they can advertise to the people they do want,” said Vargas.

Consumers who visit Healthcare.com and don’t immediately redirect themselves to HealthCare.gov will be able to search for affordable insurance options. Vargas is hoping to rebrand the site as the “Kayak for health care.”

Awaiting a call from President Obama

Given the similarity of the domain names, it’s perhaps surprising that the Department of Health and Human Services has not reached out to Vargas to suggest he refer people to HealthCare.gov.

Vargas says he hasn’t received word from government officials or any of the two-dozen contractors and marketing agencies tasked with running HealthCare.gov.

He hopes that the government does reach out, as Vargas has a thing or two to say about building a functioning website. Since HHS released a blog post Sunday stating that it will recruit the “best and brightest” to fix HealthCare.gov, thousands of entrepreneurs and developers have offered a helping hand.

Vargas believes the contractors made some rookie mistakes. For instance, people didn’t realize they needed to register first, before searching for insurance options. People have grown accustomed to searching without any obstacles — it takes less than a second on Google to find anything you need.

“We would be open to advising HealthCare.gov on creating a good user flow and making sure it’s a strong consumer experience,” he said. “We want to be part of the solution.”