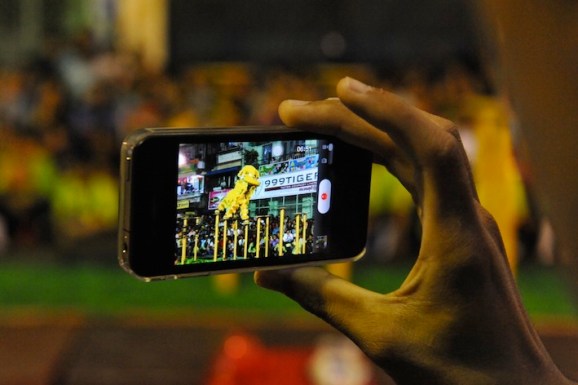 This is a guest post by Ujjal Kohli, the CEO of Rhythm New Media.

That mobile ad revenue is lagging behind consumer usage has become a common refrain. Every day, someone proclaims in the trade publications that publishers and advertisers have yet to crack the code on mobile monetization and achieve business success.

But, this is false.

The code is cracking — premium video is the key, and, there is great success to behold.

The fact is that people who grasp the potential of the mobile environment know that premium video is the driver of business success stories in mobile. In order for the whole industry to build upon that and achieve widespread success, we must understand exactly how video becomes the key to mobile success, and how it plays its transformative role in that success.

So, what does premium video do for mobile that is so powerful? I would argue that it unlocks consumer engagement, like no other media.

There are a few numbers to raise concern. Recently, video ad server FreeWheel reported in its quarterly Video Monetization Report that mobile made up 13.2 percent of all video views in Q2, but only 5.6 percent of ad views. It also reported that while people are increasingly using their mobile phones to watch videos, ad revenue isn’t keeping pace and, for that reason, the ecosystem is not thriving as it should.

Yet, I would argue that those who have endeavored to report on the FreeWheel data and this trend of lagging monetization haven’t taken a close enough look at mobile monetization success where it does exist, and what those drivers truly are.

I’ve read the FreeWheel report myself, and I think most trade coverage unfortunately misinterprets its findings on the mobile video segment a bit.

While some mobile ad segments may perform at a lesser rate, video—especially premium video—actually performs better on mobile devices than it does on a desktop, primarily because it is so uniquely suited to that consumer mode. This is particularly evident in mobile video’s high completion rates. They are often 80 percent or higher for premium video on Rhythm properties, as compared to desktop’s completion rates which average out at 73 percent.

While desktop video faces the challenge of distracted, multitasking viewers who can change screens when ads play, mobile video thrives thanks to the full screen, immersive viewing experience it delivers.

This may not translate into comparable monetization rates today, but it assuredly will in the coming months as more innovations come into play for mobile advertisers and publishers who wish to tap into the mobile mindset.

There is progress and video is driving it.

The Nielsen Company has also conducted research on the mobile video landscape that tells me we can feel strongly that across all video platforms—TV, online, and mobile included. We are in a solid position to assess mobile video’s effectiveness as it relates to other platforms.

Here’s what the Nielsen research found.

In advertising, video wins. Video ads outperform banner ads in key metrics including brand recall, messaging, and likeability.  We know that video ads routinely outperform display ads based on most any criteria.

Mobile video ads can help augment ad performance on other platforms. In this Volvo case study, combining smartphone and tablet video advertising with online and TV video advertising drove 48% more growth in awareness than TV advertising alone.   We have found that mobile video campaigns for brands such as McDonalds, GM, and others drive as much as 48% growth in aided recall over TV alone.

How video can propel the mobile experience and success

Creative firms and agencies are growing this segment by customizing campaigns to the mobile device for their mobile publishers, not just repurposing desktop or TV campaigns.  This is one thing that all successful companies in the mobile display space, not just in mobile video, have in common.  They take customization very seriously and treat mobile as its own segment, not just a place to repurpose ads designed for other screens.

Environment, mode, and mindset all have implications for user interface, graphics, messaging, interaction, and design. It seems like a no brainer. Yet, it’s alarming how many marketers and how many agencies gloss over these seemingly intuitive considerations. Those who pay attention and embrace platform specific customization are reaping the returns.

Advertisers and their media and creative teams need to think beyond the one-way communication of your everyday static ad and find new ways to engage the audience in a visually-driven, multi-stage, bi-directional interaction to engage their audience effectively and shape the way consumers perceive their advertisements.

To do this, tactically, visually, emotionally provocative options, such as video, and the most strategic possible ad units become the key.

It’s time to take a step back and learn from the success stories in our midst. Those who have embraced the mobile environment and its unique considerations and power are seeing success at scale—usually when they use video. Anyone doing business in the mobile video segment can succeed too when they consistently, skillfully use video to engage the mobile consumer and propel their own monetization strategies.

Ujjal Kohli is CEO of Rhythm New Media. He has over 25 years of experience in general management, engineering, marketing, strategy, M&A, and venture capital. He was previously CEO and cofounder of Meru Networks and EVP of Marketing & Sales for AirTouch Cellular. Ujjal is a private investor/advisor in several startups, including ByteMobile, Bridgewave Communications, Jasper Systems, EAS Inc, and Funamobl.