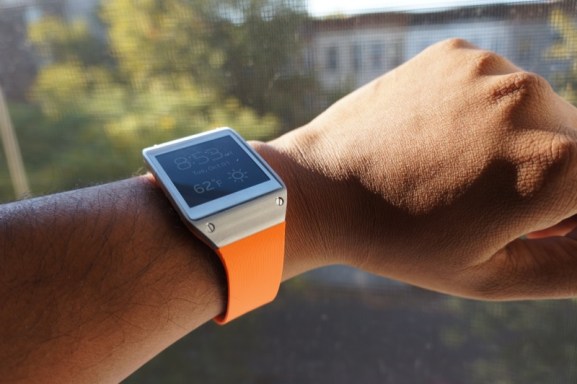 Samsung's Galaxy Gear smartwatch -- will the next one take phone calls?

Nearly one out of every three people who has bought Samsung’s smart watch is reportedly returning it.

A document leaked to Geek.com reveals that the Galaxy Gear has an astonishingly high return rate of 30 percent in Best Buy locations.

VentureBeat was the first publication to look at Samsung’s “blocky” smartwatch, three days before the official reveal in September. The device was highly anticipated, and rumors circulated like crazy about the hardware, design, and whether the gadget would be a hit with consumers.

The strong consensus reached by our team of reviewers was that the watch kind of sucked. Wearers found it clumsy, unfashionable, and “relentlessly inessential.” Ouch.

It appears consumers (and Samsung execs) have come to the same conclusion.

The $300 Galaxy Gear is sold in Best Buys around the country, where Samsung employees help customers make purchasing decisions. Samsung has reportedly asked these employees for input on the sky-high return rates.

Despite Samsung’s brilliant ads and positioning the Galaxy Gear as “the next big thing,” the watch has failed to win over consumers and has been something of an embarrassment for Samsung, which is doing well with mobile phones and tablets.

The reality is that Samsung is a follower, not a leader. It does its best work in markets already pioneered by competitors, like Apple did with the iPhone and iPad.

Amidst the crowdfunding success of the Pebble smart watch and excitement surrounding wearables in general, Samsung wanted to get an edge on its competition by getting a product on the market early (i.e., before Apple).

This strategy has backfired. Samsung was a little to eager, focusing on being fast rather than getting it right, and now amount of input from store employees will make that right.