Today, respected research and advisory firm Forrester dumped on Facebook, saying that it is failing marketers. The real problem, however, is actually that Forrester is failing its customers.

“You must act quickly,” he admonishes Facebook chief executive officer Mark Zuckerberg, schoolmarmishly, in an open letter, “before more marketers act on their growing dissatisfaction and start earmarking an increasingly smaller budget share to your company.”

This is, of course, the company that just collected $4 billion in advertising revenue last year in one of its first full years of hardcore monetization attempts, as Forrester itself notes. And it’s the company that finally figured out mobile ads for everyone else. And, nearly every large company now markets on Facebook, as Elliot reminds us.

Apparently, they’re all idiots who like to throw away money.

Forrester arrived at this interesting conclusion the way research companies typically arrive at their interesting conclusions: by talking to people. Specifically, in this case, Forrester talked to the massive number (not) of 395 marketers and “e-business executives” at large companies in the U.S., Canada, and the U.K. (Because, of course, large companies are the most innovative at new forms of advertising.)

Which just proves they asked the wrong people, since Facebook generates 10 times the shares, 20 times the traffic, and 30 times the new customers that Twitter does.

All data is stupid data if it’s the wrong data

But actually, the problem goes much deeper than that. In putting this report together, Forrester looked at the wrong data — the cardinal error when generating conclusions since they’re almost guaranteed to be wrong if you don’t properly understand what you’re analyzing. 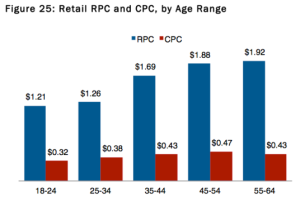 Forrester’s report is anecdotal, generated by going to “executives” and asking them what they think. That may very well prove that Facebook has a C-suite image problem — and that very well be a valid issue — but it says very little at all about the success or failure of advertising on Facebook. In a court of law, it might be classified as “hearsay.”

That’s something that native digital advertisers know in their DNA.

“When we look at the success of campaigns, we always need to look at the data,” Nanigans senior vice president Dan Slagen told me this afternoon. “And we see success on Facebook. It’s not a matter of opinion; it’s all about the data.”

This debate is as old as Aristotle, who claimed that women had fewer teeth than men because he believed he could find truth by thinking really, really hard (and maybe asking a few bearded buddies) rather than going out into the real world and collecting valid, relevant data with which he could test his hypotheses. (That’s called science.)

In other words, Forrester: Get the data, dammit, before you make a fool of yourself. The right data.

This is the kind of information you can only obtain by analyzing billions of Facebook ads. By watching and tracking what Facebook users are doing. By analyzing CPC and CTR and CPMs and RPC and — especially — ROI. In other words, by going out into the real world and finding out what’s actually happening rather than deciding how many teeth women have via deductive analysis.

“We were surprised, like everyone else,” Slagen said about the Forrester report. “Our data does not suggest that marketers are not having success on Facebook — we’ve been growing quarter over quarter, and it’s because the results are there.”

There’s absolutely no question that there are multiple marketing channels, and that Google search ads, email advertising, and affiliate marketing, to name a few, are great marketing avenues that every company should take advantage of as much as possible. But there’s also no question that Facebook is a must-have in the modern marketer’s bag of tricks, and that over the past few years, the world’s largest social network has become better and better at helping companies get the right ad for the right product to the right person at the right time.

(Even though, of course, the site’s raison d’etre is not connecting advertisers and consumers, but connecting people with people.)

And companies are not leaving. In fact, some that said they were — General Motors, I’m talking about you — have actually come back to the site.

“We’re not seeing companies spending less time on Facebook,” Slagen says. “We certainly know, however, that ad campaigns that are not executed properly don’t work.”

Forrester does great work, by and large, and I’ve featured their studies prominently in my stories before. But this “report,” frankly, is an embarrassment.

And publishing it as an “open letter to Mark Zuckerberg” to call out Facebook’s CEO and attempt to pressure Zuckerberg to make Facebook even more business-friendly than it already is, is just attention whoring and distasteful.