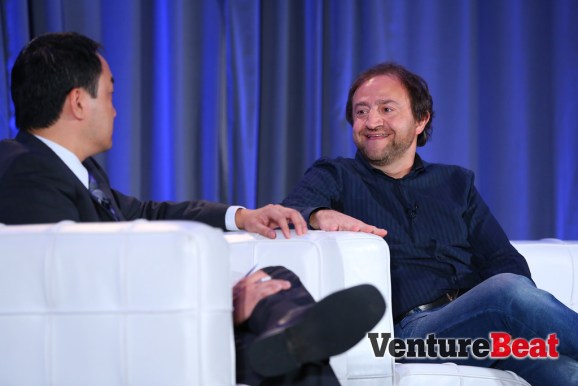 Gaming can bring the world together, and a tiny thing like language shouldn’t keep us apart.

That’s the sentiment that Simon Khalaf expressed during a Fireside Chat at the GamesBeat 2013 conference. Khalaf is the chief executive officer of mobile-analytics company Flurry, which provides free data to game developers. In his chat with GamesBeat editor-in-chief Dan “Shoe” Hsu, Khalaf spoke about the audience for mobile games, and how the market is now worldwide.

“If you want to hit it big, you have to think of the game market as global,” he said. “If you think of mobile, it’s really shattered borders. You cannot think of the U.S., Europe, and China as being separate countries [if you’re a developer]. People in these different countries kinda behave the same when it comes to gaming.”

As an example, Khalaf pointed to gambling. He said that people in all cultures respond very similarly when it comes to casino mechanics. It’s an experience that transcends culture.

Khalaf acknowledged that a language barrier exists, but he doesn’t think that should hold back studios from trying to bring their games to everyone.

“Think of who your game is for first, then worry about the geographical boundaries,” he said. “Think of clustering the globe based on an affinity to the thing you are creating.”

The Flurry boss did note that a global strategy means that developers cannot rely on Apple or Google to adequately distribute games. Khalaf says that if studios want to find that worldwide audience, they need to have a marketing strategy from day one.

“You have to take matters into your hands.”