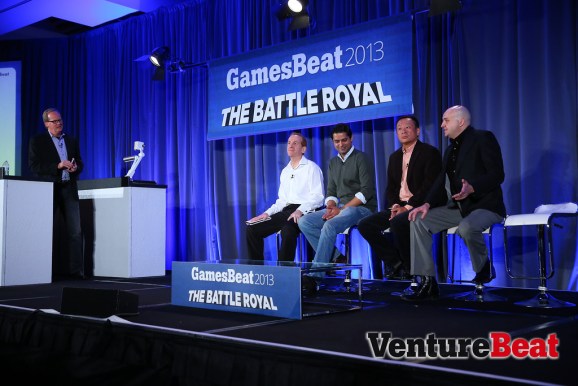 Our pro investors panel weigh in on hot profit trends in gaming.

REDWOOD CITY, Calif. — Video games are a multibillion dollar industry, and while blockbuster productions like Grand theft Auto V and Call of Duty impressively rake in billions on their own, not few console or PC games in North America or the U.K. generates that sort of profit. In fact, as the trends illustrate, mobile games, especially in Asia, are filling investors’ wallets better than any console or PC title. And according to GamesBeat 2013’s “The Next Billion Dollar Game Investment” panel of experts today, the art of money making within the games industry is best executed in the East, not the West.

“When it comes to creativity and innovation, U.S. and Europe are still very strong,” said Tim Merel, the managing director of Digi-Capital. ”When it comes to the science of making money on games, China, Japan, South Korea are about 18 months to two years ahead.”

Asia’s profit lead primarily comes from mobile gaming, where most apps use the free-to-play business model, a very common theme seen on mobile overall. Out in the U.S. and U.K., there has been a growing demand for free-to-play titles. Planetside 2, World of Tanks, and rvrn MMORPGs like Star Wars: The Old Republic are recent examples of this, but these are not the same, snack-sized breed of their mobile brethren.

The most recent revenue results, stemming from 2012 — highlighted by The NPD Group — show Asia generating over $36 billion in revenue, with the U.S. and Europe each generating approximately $20 billion in video game sales, respectively.

So if game creativity and innovation resides in the U.S. and U.K., then why aren’t these regions making more money than Asia? Free-to-play seems to be the differentiating factor. And considering the two-year gap between Asia and the West that Merel pointed out, we may not see the same success until 2015.

Currently in the U.S. and Europe, traditional retail titles rule the console and PC platforms, but more and more games are being designed with free-to-play in mind. As GamesBeat contributor Kat Bailey points out, the PlayStation 4 will “eventually feature a large number of free-to-play games,” this generation. Steam has plenty of free-to-play games in its catalog; the free-to-play mega hit World of Tanks is now playable on Xbox 360. Even Nintendo is getting in on the action, testing the free-to-play arena for the first time with Steel Driver.

Based on this trajectory, it appears as if every platform is putting a hand, however big or small, into the free-to-play domain. Whether or not North America and Europe replicate the success seen in Asia remains to be seen, but the free-to-play trend isn’t going anywhere — except maybe into your next game.