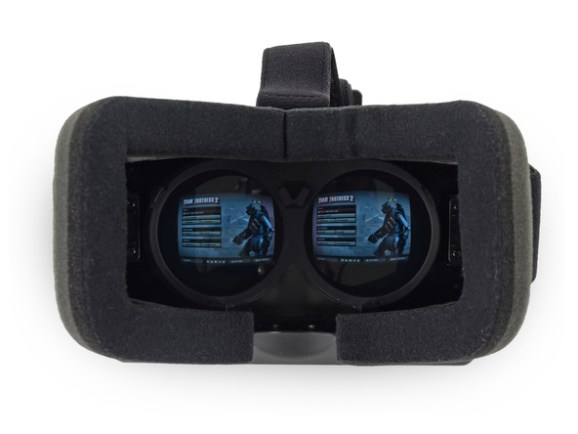 The Oculus Rift headset. It's coming to mobile devices, the company announced at GamesBeat 2013 today.

Correction 10:50 a.m. Pacific time: The Oculus Rift will support Android, not iOS, as this story originally stated. We regret the error.

The goal is to have the mobile support launch simultaneously — or as close as possible to — when the PC headset launches.

The Rift headset is for Android devices — iOS is problematic, and the company has not mentioned any plans for an iOS-compatible version. It will use the mobile device’s processor.

“We have some exciting plans on the mobile VR side as the PC VR side,” Iribe said. “We’re really looking at hitting the consumer market. We’re very excited about what we’re seeing. Skeptical about how good mobile VR could be on such a small platform. It’s pretty incredible what [John Carmack has] been able to do.”

Iribe also is interested in bringing the virtual-reality headset to home theaters, noting that it would be cool to watch TV and films in virtual reality.

The Oculus Rift grabbed attention in late 2012 when the company launched a Kickstarter, asking for $250,000. Excited by the possibility of playing PC games with virtual reality, gamers and developers pledged nearly $2.5 million for the project. It was one of the first Kickstarter campaigns to grab major attention from press and the video game community, and it showed that companies could crowdfund hardware.