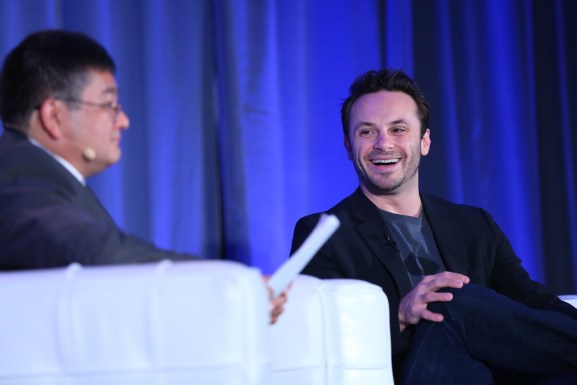 And while this nifty piece of tech may have shown that crowdfunding can indeed support hardware, the chief executive officer of Oculus knows that without good games, the niftiness only goes so far.

“[Virtual reality] is a new platform, and we need made-for-VR content,” said Iribe, who was the main speaker this morning at GamesBeat 2013’s opening chat at the Hotel Sofitel. “There will be lots of ported content — delete the UI for VR — and then you can look around Half-Life or Team Fortress 2. But content is best when it’s made for VR. It’s kinda neat. You try something made for PC and a 2D screen, and then you try something made for VR — maybe it’s just a procedural world. But you feel connected, feel like you’re there.

“That’s what is going to define the platform.”

Just like mobile games are best when made for iPhones and Androids, Iribe maintains that virtual-reality games will be different than what you’ll get from a PC port. “You don’t have PC games ported to iPhone — you have games made for iPhone.”

Iribe underscored with point by showing some footage from developer CCP Games’ Eve: Valkyrie, a starfighter game. While the trailer wasn’t in 3D, it’s not that difficult to imagine how it would look with the space scenes displayed on a screen strapped to your face.

And while Iribe focused a great deal on the value of VR for gaming, he sees an even broader use for tech behind the Rift: the movie theater.

“I feel VR can disrupt theater — Gravity, it could be made for VR. I kept looking at top and bottom being so short,” Iribe said. “In VR, you could’ve been floating in space and felt that sense of presence — could’ve shrunk back to the screen. Feel could have big impact on theater.”