“I wanna be a billionaire so freakin’ bad …”

When he sings the song “Billionaire,” Andrew Chung is different. Unlike you or me, he has a pretty good shot at making the words come true. That’s because Chung is a partner at Khosla Ventures, one of the most idiosyncratic and powerful venture capital firms in Silicon Valley.

“Buy all the things I never had …”

But he’s also different because the man can actually sing pretty well. He’s such a good vocalist, in fact, that he was a finalist in a major musical competition — Hong Kong Idol in 2002 — and was offered a contract from one of Asia’s biggest record labels.

He could have been a star.

Instead, he turned it down to continue his business career. Good thing he did, because now he’s backing some companies that could truly change the world — like EcoMotors, which makes an internal combustion engine that’s 15 percent to 50 percent more efficient than modern technologies; or LanzaTech, which captures carbon monoxide and other waste products from industrial plants and converts them into fuel and useful chemicals.

And Chung still sings. He learned the Jason Mraz song “I’m Yours” and sang it at his wedding. Later, he sang the song onstage at San Francisco’s historic Fillmore auditorium during a benefit for Build.org.

“Oh, I swear the world better prepare
For when I’m a billionaire”

And then there’s the “Billionaire” song, which he sang at a holiday party for Khosla Ventures. Chung has already seen success, in the boardrooms of startups and onstage at the Fillmore. Like Bruno Mars in the song, he’s got big dreams for himself, and for the world.

VentureBeat: You were an entrepreneur yourself before you became an investor. How did you get your start?

Andrew Chung: My entrepreneurial journey actually stretches back pretty far, with my parents. They started a Chinese restaurant business, like many Chinese immigrants who don’t speak English do. They put me to work at age 5.

At the time, I had gleaned enough from Sesame Street to be able to say a couple of words in English, so they put me to work really early. I did a lot of the outbound marketing, customer service, cash register, calculating tax, and everything. I spoke English, and I was good at math back in the day. So they put me to work.

My first real startup was during college. I was the first teaching fellow at the time to have my own website for course notes back at Harvard. I was doing all this HTML stuff and helped beta test Macromedia Flash — this was in the mid-‘90s. I ended up employing 30 Harvard kids from the computer science department, paid them $20 an hour. Monday, Wednesday, and Friday, I would drive around New England trying to sell deals and pitch very advanced web apps, which to the people at the time looked like magic.

It profoundly changed my life. Because of the Asian parental decree, I was supposed to be a doctor or an engineer. Once I got them over that, they maybe wanted me to be an investment banker, something on Wall Street. I ended up turning down an offer to go to Goldman [Sachs] to join Trilogy, which was the high-flying enterprise startup of the time.

One of the cool things Trilogy did during training was force every single person in the class [of new employees] to incubate a company. My group came up with this idea to do account aggregation, kind of the way Mint does it today. That ended up becoming UberWorks, which ultimately got bought by Network Commerce for $23 million. It was an exciting outcome for a bunch of us. I think I was 21 or 22 at the time, running this crazy company for a year and a half.

I started life as an entrepreneur because I wanted to find the next great idea, the next big idea, and work on something that would change the world. As a venture capitalist, what we’re in a great position to be able to do is to look for technologies that have the potential to change the world and do it across multiple companies, multiple sectors, multiple stages.

VentureBeat: Tell me about your music career.

Chung: When I was a senior [in college], my girlfriend at the time convinced me to do this thing called Chinese-American Idol. So I started singing these Chinese pop tunes and ended up winning the national contest in the U.S. 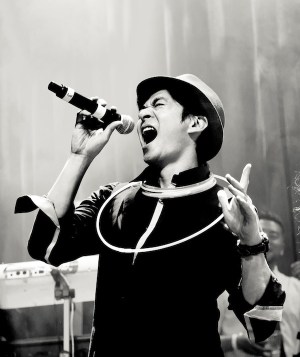 Above: Andrew Chung, during his Hong Kong Idol days.

Three years later, when I went to China, I got pushed into doing Hong Kong Idol, which has been around in Hong Kong for 40 years, a lot longer than here. I ended up getting to the finals of that, which was exciting, because I think there were 3,000 people that auditioned.

At that point, they offered me a contract, which was really tough to sign. It was a high opportunity cost. The terms are really difficult. I was knowledgeable enough to know that — and versus the business career and the way I wanted to make a difference, I ended up deciding not to go that way.

At the time it was a bit of an odd decision, and one that confounded my family and friends. Do I go down the music path in Asia, or do I maybe join this firm called Bain and Company to do some fun stuff there? I ended up choosing to do the business thing.

VentureBeat: What’s your focus at Khosla?

Chung: We’re probably the most broad firm in terms of the areas in which we invest. A lot of that is because the theme of what we try to do here is really about inventing the future. About finding the next big idea, the next “black swan” idea, that is highly disruptive and has the ability to transform an industry. That’s the overarching thing that ties together everything that we do.

For me, that’s one of the reasons I joined Khosla Ventures. I had the ability to look at a number of these different areas and think about, “Man, how do I change infrastructure? How do I change society’s infrastructure, whether it be in the energy area, education, health care, toppling the publishing industry, changing the travel industry?”

It gives me the ability to look at really disruptive things in each of these categories and identify things that I think that I’m excited about, that I would invest in.

The areas I tend to focus on are companies that have what we like to call around here “Emotion 2.0.” A product or service that creates an emotional connection to users, that gives you automatic engagement, even if the product isn’t that mature. Each one of the companies I invest in follows that type of paradigm.

VentureBeat: What do you look for in entrepreneurs?

Chung: In general, we’re looking to invest in entrepreneurs that are rock stars. That can mean a lot of different things here, compared to some other firms. It could be the greatest scientist in the universe in one dimension. He could be the expert in blue lasers, the world expert in that area. It could be the chief data scientist at a large company that we’ve known for a long time and believe in. It could be a young person that’s a first-time CEO that we feel has such passion and drive and an understanding of that space that it blows us away.

But at the core, it starts with betting on people that we think have transformative potential, who have the same type of large aspirations that we do as a firm, and have some ability to deliver it.

And then around that person is, hopefully, a complementary team, or at least an awareness that they need to build that team. Do you have some combination of entrepreneurial DNA, domain expertise, scale-up experience or go-to-market experience?

When we think about hunting for black swans, or when [Khosla Ventures founder] Vinod [Khosla] talks about trying to find these technologies that are so high risk, but high upside, that’s kind of the pattern that we’re trying to look for. These types of things that can create network effects that we don’t expect. Unknowable upside.

VentureBeat: What advice would you give to entrepreneurs today?

Chung: I think the first thing is to be bold, be fearless, and be willing to fail.

That’s the thing that I see again and again, the factor that ends up either leading to a great idea not realizing its potential, or something that a team doesn’t really push the envelope on and they become sort of anonymous as opposed to exceptional. I think it’s about that appetite for taking a risk and being willing to fail. It’s a hard thing to teach.

If you ever talk to Vinod, you get very immediately that he likes to go against the grain. It’s not important what all the other VCs are investing in or chasing after. In fact, we like it when we’re the only ones chasing after it, because everyone else is afraid of it. We want to see that in our entrepreneurs, too.

From a tactical perspective, the advice I usually give entrepreneurs is to be different in the way that they approach VCs and that can be backed up with a lot of research and thoughtfulness.

We see hundreds of plans a day. Frankly, all of us are running around—I’m on nine boards. I’m trying to help my CEOs, every day, deal with their biggest issues. And yet I’m trying to meet a new company and, in a very short period of time, get excited. You have to have me at “hello.”

In terms of your mode of delivery, especially because I’m a performer, I want to be left with a good impression. That can be done in a lot of ways, one of which is a demo. Having a really good demo that is jaw-dropping can transcend any great PowerPoint deck.