Can you drive from the Mexican border to the Canadian border for free?

On Saturday, Tesla Model S drivers woke to find that radical idea was now a reality.

Their cars’ GPS systems confirmed that the corridor of Tesla Supercharger DC fast-charging stations along Interstate 5 from San Diego, California, to Vancouver, Canada, was now complete.

The Supercharger stations work only with the Tesla Model S luxury electric car, and using them is free for all Tesla drivers. 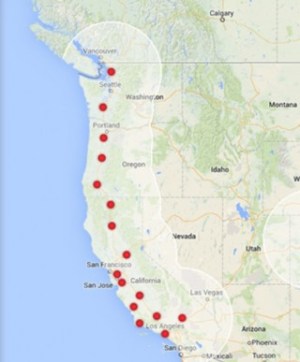 A Supercharger station can recharge the Model S battery pack to 80 percent capacity–or about 200 miles of range in the top-end 85-kWh model–in about 20 minutes.

Tesla has hinted that further engineering is in process to cut that charging time to as little as 10 minutes in the not-too-distant future.

The last critical Supercharger location opened at Eugene/Springfield, Oregon, last Friday. It brings the total number of functioning Supercharger stations in the U.S. to 31.

And with that, road trips in the Model S–even the 60-kWh version, as long as it has the Supercharger upgrade–become possible from San Diego all the way up to the Canadian border.

Within the last month, Tesla has activated California stations in Corning and Mount Shasta, as well as one north of those locations in Grants Pas, Oregon.

Now the Springfield site in Oregon complements the existing Supercharger in Woodburn, making it possible for Tesla drivers to make the trip from San Francisco or Sacramento to Portland.

In Washington, the Burlington and Centralia sites have been operational for several months, making travel from Portland to Vancouver, Canada, a free run in the Model S.

Starting in the middle of this year, many Tesla Model S owners have driven from San Francisco or Sacramento to locations near the Mexican border, using the first set of Supercharger stations along I-5 for that part of the route.

Each Supercharger station is outfitted with at least four charging connections; busier locations can recharge up to eight vehicles at a time.

The Supercharger stations have been completely funded by Tesla. They are often located near restaurants or shopping settings, where drivers can take a short food or bathroom break and then return to their cars ready for another 3 hours or so of travel.

More of these DC fast-charging stations will come online in the next month or so, to enable trips from Phoenix to Vancouver. Additional locations will make road trips around the metro regions of Los Angeles and San Francisco more convenient.

But the backbone of the West Coast border-to-border corridor for Tesla drivers is now functional–which should start to put an end to those stories about electric cars only being good for trips within a 35-mile radius.