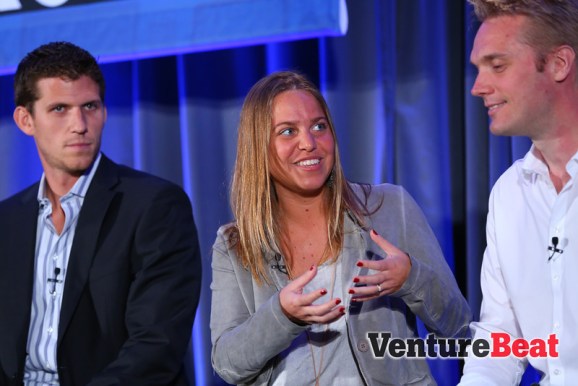 REDWOOD CITY, Calif. — One thing came out of this morning’s discussion on making mobile games successful.

No one can agree on how to do so.

During a panel at Tuesday’s GamesBeat 2013 conference, representatives for Chartboost, Heyzap, PlayHaven, and Supercell (the makers of that little Clash of Clans game that you might have heard of) discussed the ins and outs of getting your game out to players. And even in 2013, people can’t agree on what’s more important: having a good game or having a good business plan.

However, we saw hints that making good mobile games is nailing aspects of both.

“It’s true you need a [mergers & acquisition] strategy — but if the experience with the game doesn’t deliver, the rest doesn’t matter,” said Kristian Segerstrale, a member of mobile game publisher Supercell’s board. One of his company’s strategies is cross-promoting Clash of Clans with another of the world’s largest mobile games, GungHo Entertainment’s Puzzle & Dragons.

And Chartboost chief executive officer Maria Alegre responded, “You build that value. … It’s a combo of designing what is fresh and making the game fun and hard enough to keep playing and how you build your business model.”

Moderator Susan Choe, the managing director of Visionaire Ventures, later asked what will resonate from a platform perspective — besides a big, fat checkbook, of course, to lure a company to a specific platform.

“Gamers are always looking for new content, new mechanics — looking for new graphics,” said Heyzap co-founder Jude Gomila. “When I look for a new game, I look for new mechanics, for style. I’m mostly interested in fresh gaming concepts.” He singled out King’s Candy Crush Saga, a game where he says “multipliers” are secondary to the primary game concept.

Supercell and GungHo made cross-promotion of mobile games a success with Clash of Clans and Puzzle & Dragons. Segerstrale says his company has seen positive results in both Japan and the West with this strategy. “There’s a delight in going into Puzzle & Dragons dungeons and seeing Clash of Clans.”

PlayHaven vice president of publisher development Zach Phillips recognizes its importance but notes it may not always be the proper strategy.

“[It’s about] more than sending users from one game to another,” Phillips said. “What’s the baseline conversion rate [per player]? Can I get the user to pay for the new game and come back to the old game? What’s the value of cross-promotion?”

Even the role of the publisher is under debate.

“Is there such a thing as publisher leverage anymore? No,” Segerstrale said. “… Traditionally, publishers help bring to market. The funding remains real — access to players, can contract Maria [Alegre] to get players. But that is no longer ‘black magic’ — it requires a couple of relationships that are easy to get.”

And even the value of exclusives is under siege.

“Nothing’s exclusive in mobile,” Alegre said. “Sign up for six months [of exclusivity], and you miss out.”

Even Google Glass gets roped into the conversation.

“Talking about Google Glass. To us, for publishers, game developers — the old pub term is distribution doesn’t exist. It’s Google and Apple and your own smarts on how you can cross-promote your games,” Gomila said. “Take [developer] Grand Cru — [I’m] impressed with those games. Really cool new stuff I haven’t seen before. Playnery from South Korea. Also excited with teams on Google Glass — a few there worth checking out.”

Regardless how publishing and development evolve in the ever-changing mobile market, one thing remains the same for all developers: How do you balance creativity with sound business planning?

You’d think a publisher could help with that.