Want a coffee? Now you can pay in Bitcoin.

The world’s first Bitcoin ATM is opening for business this morning at a coffee shop in Vancouver, Canada. You can now buy, sell, and trade Bitcoin at a real, physical machine, depositing cash and checks for Bitcoin.

“This is progress … we’re bridging the gap and bringing reality to this digital currency,” Jordan Kelley, CEO of Robocoin, the company behind the ATM, told me this morning in Vancouver. “We’re bringing it to the masses.”

It’s all part of Robocoin’s plan to make virtual currency Bitcoin “grandma friendly.” The company wants to make the geeky crypto-currency available to anyone, right on the street corner. The Robocoin is a full automated teller machine with biometric security — a hand scanner — that allows you to buy Bitcoin in any of 60 different currencies. It is integrated with Mt. Gox and Bitstamp, two of the premier Bitcoin exchanges, and can be placed in stores, at technology conferences, and in financial service organizations.

And yes, you can now withdraw your Bitcoin — in the currency of your country — right on the street.

Kelley said the machines are going into Canada first as a strategic decision — some of Robocoin’s top dealers (who buy and place the $20,000 ATMs) are in Canada. Robocoin machines will soon be placed into other Canadian locations in Montreal, Toronto, Calgary, and the nation’s capital, Ottawa. There’s also the small detail that Canada’s financial system is a little less onerous to navigate than that of the U.S., making regulatory approval easier to obtain. 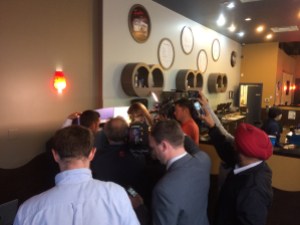 Above: Everyone’s excited about the new ATM

Most of the people visiting the coffee shop seemed bemused by the newfangled device.

“What is Bitcoin?” one elderly gentleman asked me, sipping his coffee.

I’m not sure my “virtual currency that is digitally mined and without any central authority” explanation helped him all that much.

That, of course, is precisely the problem Robocoin and its dealers have faced and will continue to face. But Kelley, who likes to call Bitcoin “the people’s currency,” is confident that there is enough of an active userbase to make the Bitcoin ATM an idea whose time has come.

“It’s going to be a daily use machine,” he said. “This is really going to add liquidity to the market … providing that instantaneous access which has never happened before.”

If that’s the case, Robocoin will have to become known for safety and security — something that people want on Facebook, but demand from their financial institutions. CTO John Russell told me that none of the data the machine uses is publicly available on the Internet; it’s all transacted over a secure VPN connection.

And if someone does a smash-and-grab with a pickup truck, grabbing the entire ATM machine?

“There’s nothing stored on the device itself,” Russell told me. “We don’t save any personal or financial data.” 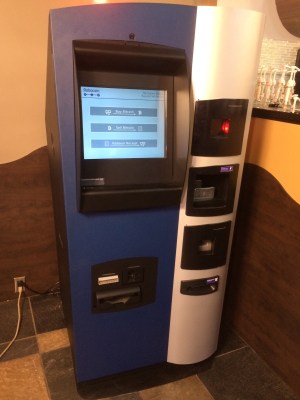 The entire system has been architected not just with physical security in mind for the device, and digital security for your Bitcoin funds, but also for regulatory compliance. Bitcoin has a bad rap as being the currency of choice for illegal transactions, and Kelley is determined that Robocoin will stay aboveboard.

“It’s architected with absolute security in mind,” he told me. “And secondly, it was really built with compliance in mind … when an operator sets up shop, they have full visibility of their customers, and we’re sending them all the information necessary to adhere to their governmental regulations … to ensure there’s no trouble.”

The owner/operator of this local machine is Jackson Warren. He’ll make pennies on each transaction — as will Robocoin — and he sees big things in the future:

“When we have thousands of these things all over the world, then it’s going to really get exciting.”

That’s a sentiment Kelley echoes — and one I heard from dozens of others checking out the coffee shop.

“It’s a pretty exciting day,” Kelley told me. “I feel pretty damn good — even though I only had five hours of sleep!”