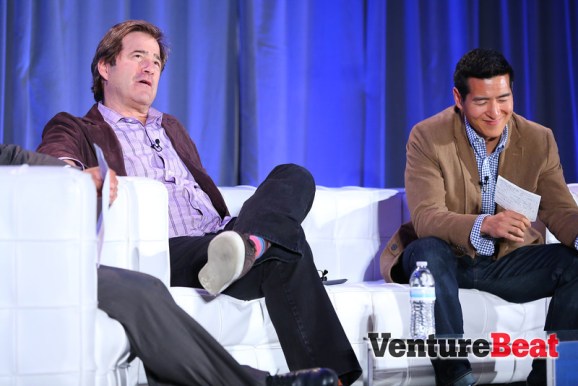 REDWOOD CITY, Calif. — In the next five years or so, you will probably be picking up a new pair of augmente-reality glasses. And that’s not all.

“Ten percent of Westerners will be wearing some kind of augmented glasses [in the next five years],” former EA chief creative officer Bing Gordon asserted. “They probably won’t be Watch 1.0 or Google Glass 1.0, but they’re too seductive. It’s too powerful not to get there, especially for a multitasking generation.”

Augmented reality was only one of the topics of conversation in a GamesBeat 2013 discussion between Gordon and investor Tim Chang that also predicted the future of gamification, the next generation of console gaming, and other hot button issues.

Among their other predictions: If you’re a game designer, you may just have a future in a Fortune 500 company.

“I don’t think you can run a consumer facing company anymore without some kind of game competence,” Gordon said.

Chang agreed, adding that skills like analytics and play behavior will be the core competencies of the future, enabling large companies to predict what consumers will want before they know. The pair even came up with a new title: habit engineers.

Looking more toward the present and the advent of the next generation, the pair discussed the possible fate of the Xbox One, which Gordon likened to the 3DO.

“I lived through watching the 3DO try to be the be-everything box,” Gordon said, referring to the ill-fated multimedia console from the ’90s. “Sometimes history repeats itself, sometimes it doesn’t.”

On the other hand, Microsoft has a secret weapon, he said, calling Xbox Live the “most important consumer invention of the past 15 years,” along with iTunes and the App Store.

“Once you get a profile and Gamerscore and Achievements, you don’t change. I think the network effect trumps all,” Gordon said. “Microsoft might have lost its secret weapon. But having 80 million who respect what you have achieved is hard to lose.”

Chang added: “Having a device-as-a-service can help you avoid gravity for a year or two. People get lazy and forget to stop paying for it.”

Given his feelings on Xbox Live, it wasn’t surprising to see Gordon liken the packaged goods business to the struggling newspaper industry, which he said built a business on “paper trucks and return rates.”

“And it’s hard to own the New York Times building when most of your assets are in printing presses and trucks,” he said.

Even with the challenges the new consoles face, Gordon seems more optimistic about the next generation than others.

“Gamer makers will survive,” he said. “The next generation doesn’t have any allegiance to retail chains or delivery trucks.”