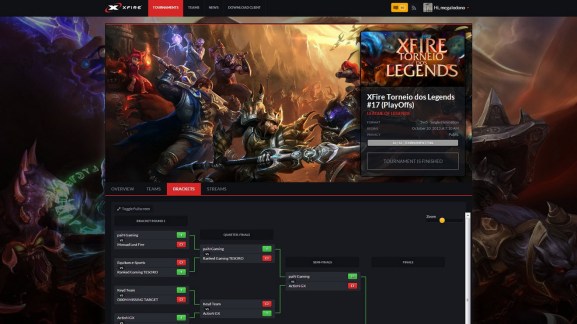 Xfire and BoaCompra, a division of media conglomerate UOL, held a League of Legends online multiplayer game tournament over the weekend that drew 3,400 Brazilian players. The event generated 750,000 event page views and more than 20,000 registrations for the Xfire beta test.

Santa Monica, Calif.-based Xifre said the event drew over 41,000 concurrent viewers on Twitch, the video game livestreaming service. The stream also saw more than 310,000 unique viewers and had an average of 26,000 viewers during the finals match broadcasts.

Mark Donovan, CEO of Xfire, said in a statement, “Our goal with this first tournament was to get feedback from event organizers and the community, and we were astonished with the outstanding show of support for our platform approach to eSports; and this is only one small market in a very global opportunity.”

Donovan is speaking on a panel today on e-sports at our GamesBeat 2013 conference.

Joao Pott, head of e-sports for Boa Compra says “e-sports has seen massive growth over the past couple of years, especially in Brazil, but until now there hasn’t been a solid partner for us to work with. With Xfire, game communities and players can set up an event and be playing against their friends in minutes. We’re really excited about what this will bring for both companies in the future.”

“We’re excited to finally show players the platform we’ve been working on for the past 18 months and to take Xfire back to its roots as a competitive gaming platform,” Donovan said.