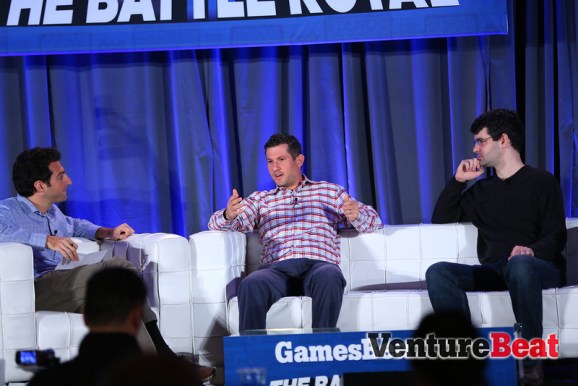 “You will see Windows 8 become a major player in the mobile space by late 2014 or early 2014,” Rosenblatt said during a GamesBeat 2013 chat, later adding that he thinks it will break 18 percent market share. “That’s a prediction.”

Rosenblatt argues that Microsoft has recovered from a rough launch and largely given developers the tools they need to succeed, such as support for consumable microtransactions. And he asserts that a real success story is just around the corner: “Studios want to see a developer making a million dollars a month on a game, at which point, ‘ding.’ Developers will start moving toward Windows 8.”

Since its release in 2012, the mobile version of Windows 8 has struggled to reach the heights of iOS and Android, which continue to dominate the market. The platform has faced myriad barriers to success, including a relative lack of content and a lack of tools for developers.

For his part, Rosenblatt was particularly harsh when discussing the launch: “It was shocking to me. For the last four or five years, it’s all been about free-to-play, right? But with Windows 8, MS took the premium Xbox approach. They didn’t support consumables. It was a major swing and a miss. How can this major OS come out and not support consumables? You couldn’t buy more energy, you couldn’t buy more time, and those things are the No. 1 in-app purchases. That stuff has been fixed, but how can you launch with no consumable support? It’s crazy to me.”

Fast-forward to 2013, and the mobile version of Windows 8 still has plenty of issues. Probably the biggest of them is the size of the user base, said Zen Studios creative director Neil Sorens, who joined Rosenblatt for the discussion.

“On the App Store, there’s just not a whole lot of content,” he said. “Microsoft needs to go out there and start spending money and get some quality software on there. It’s a chicken-and-an-egg scenario.”

And it’s just not about throwing up games on the App Store, either.

But he said, “With the release of [Windows 8.1], that can start happening.”

Rosenblatt said Windows 8 represents a huge opportunity for developers in part because the Windows 8 Phone’s ecosystem isn’t as mature. “With less content to compete against on the App Store, it’s easier for newer games to stand out.”

Sorens was more cautious in his optimism given the smaller user base. Nevertheless, he agreed that things have improved. “In-app purchasing has gotten better. It was pretty rough at the start.”

On that, Sorens agreed. “They’re in this for the long haul.”