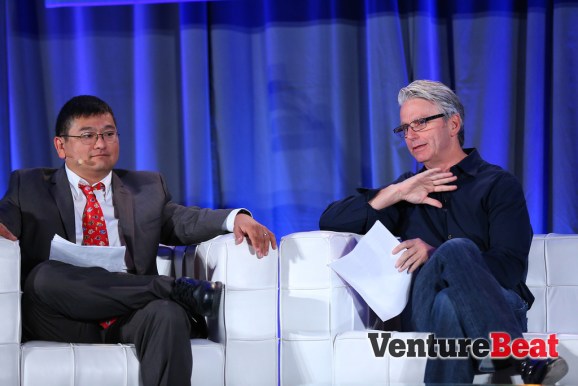 Ex-EA CEO John Riccitiello came to GamesBeat 2013 with plenty of stats about the games industry -- and even compared Grand Theft Auto V to the Super Bowl.

During the “Is Mobile vs. Console the Right Question” chat at GamesBeat 2013 on Wednesday morning, the former chief executive officer of video game publisher Electronic Arts — and now an investor in game companies — said Rockstar Games’ massive launch of GTA is a singular event not just in gaming but media. Publisher Take-Two Interactive revealed Tuesday that it had sold 29 million copies of the open-world game since its Sept. 17 release.

“[Grand Theft Auto V] shows up as the largest entertainment launch in history, going back to the 1800s and A Tale of Two Cities,” Riccitiello said. “It’s bigger than Star Wars. It’s twice the size of the Super Bowl.”

We’ll have more on Riccitiello’s statistic-rich presentation later this morning on GamesBeat.