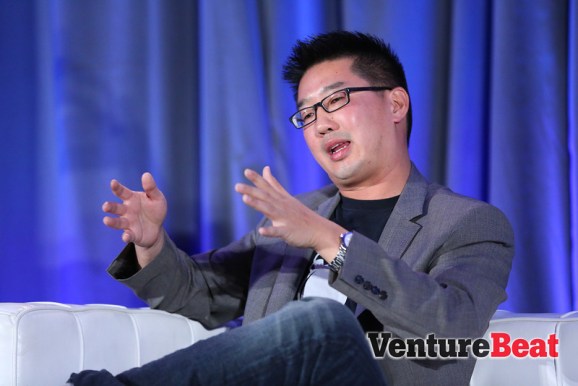 Kevin Chou, the CEO of social game company Kabam, during his chat at GamesBeat 2013.

REDWOOD CITY, Calif. — Between Planetside 2, World of Tanks, and other high-profile games, free-to-play seems primed to dominate the next-generation. But Kabam CEO Kevin Chou isn’t so sure.

“They don’t have the infrastructure,” Chou asserted during a GamesBeat 2013 chat Wednesday. “How do you enable constant, quick updates? They have to answer these questions.”

Chou believes that next-gen consoles have larger concerns than free-to-play integration, such as the continued shift from a revenue model built on packaged goods.

He used Nintendo as an example: “With Nintendo, you’re totally focused on getting this generation right. You totally devoted to winning over core gamers. Right now, free-to-play shouldn’t be their highest priority.”

Chou’s skepticism comes in the face of optimism from industry figures such as Sony Online Entertainment president John Smedley, who is touting a community-focused free-to-play model on the PlayStation 4.

This may eventually happen, but Kabam probably won’t be bringing social games like Kingdoms of Camelot to PS4 any time soon.

“As a F2P developer,” Chou said, “we want to see an install base of tens of millions before we focus on the next generation of consoles.”