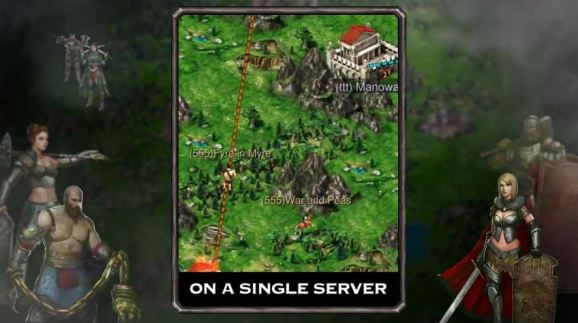 Game of War for iOS devices from developer Machine Zone.

If you put “ASAP” — the commonly used acronym for “as soon as possible” — into Google’s translation service, it won’t know what to do with it, but developer Machine Zone’s Game of War does.

Game of War is a mobile strategy game for iOS. It has gamers building medieval cities and going to war with each other in a massively multiplayer environment — and I do mean massive.

In a Wednesday chat at the GamesBeat 2013 conference with Wired’s GameLife editor Chris Kohler, Machine Zone founder Gabe Leydon noted that Game of War is capable of supporting 500,000 players simultaneously.

“There’s nothing else in the gaming industry like it,” said Leydon.

That’s a huge number of players, and Machine Zone decided early on to focus on bringing together players from around the world into a single instance of Game of War. That was the studio’s goal, but hundreds of thousands of gamers from nations around the globe did present some hurdles.

“OK, so we might have 100,000 people playing together,” said Leydon. “What happens if a player comes into the game and starts playing in an area where most people are speaking Portuguese? I’m going to think it’s a Portuguese game, right?”

Leydon and his team had this huge idea, but it was presenting a translation problem that was just as huge. Thankfully, Game of War is primarily a mobile title, and it’s that fact that enabled Machine Zone to use existing translation services and get it past a big part of the language issue.

“Mobile gives you a huge boost because of autocorrect,” said Leydon. “People don’t realize this, but what you see is that people tend to be able to spell correctly on mobile phones because their phone is spelling correctly, so you get some really nice translations.”

Machine Zone is using a software translator that can simultaneously translate 32 languages in a matter of microseconds. Autocorrect really helps to make sure that the communication can happen smoothly, but that didn’t fully solve the issue.

“What you don’t get [with mobile] is people suddenly stop saying things like ‘LOL’ and ‘ASAP,” said Leydon. “So, we decided to build a dictionary on top of the translation system that could translate slang. If you type in ‘ASAP’ — and you have an English speaker here and a French speaker there —  it will change on the server in microseconds to ‘as soon as possible’ and then that comes out in perfect French over there.”

Again, this problem was too big for even Leydon’s 80-person studio. The developer decided to turn this task over to the crowd.

“So we built a perk system into the game that pays people virtual currency inside of the game to teach us words that we don’t understand,” said Leydon. “That’s been surprisingly successful.”

According to Machine Zone’s stats, the average person cracks about eight words a day for this slang dictionary.

“These are the kinds of things that you can’t plan for,” said Leydon. “But I like to think that we’re a pretty special company. We don’t give up.”