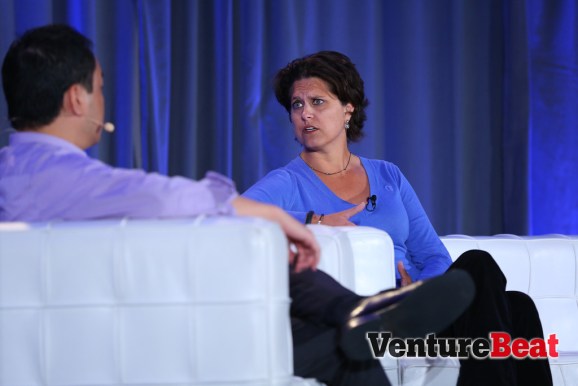 “The publishers are always late to the newest business models,” said Uhrman onstage at GamesBeat 2013. “Is it likely an Activision or an [Electronic Arts] will come to Ouya? Absolutely.”

While Uhrman would be open to offering a new Call of Duty on her platform, she doesn’t think Activision and the other publishers will bring their established franchises to Ouya. When they decide to make Ouya games, she said, expect something new and experimental that suits the platform and community.

“The reason I don’t have a Call of Duty or a Madden or a FIFA on Ouya is because there’s a perfectly good place to play those games today,” said Uhrman, referring to the consoles from Sony, Microsoft, and Nintendo. “When those publishers come to us, they’re going to bring the perfect game [for] our platform. … It won’t be the same thing.”

Ouya began its life as a wildly successful Kickstarter campaign that raised nearly $8.6 million from over 63,000 backers. The indie-friendly console has quickly racked up a sizable community of games designers — it has more than 26,000 registered developers and over 500 games — but early reviews (including ours) have been less than positive. It has a few standout game, including arrow-em-up TowerFall, but they’ve generated modest sales at best.

Despite its initial setbacks, Ouya has big aspirations. It recently launched in Western Europe, Poland, and Brazil — and it just came to all 1,800 Target stores across the United States. The company has rolled out monthly software updates to address fan and developer criticism leveled against the system. Whether these initiatives will help sell units (and games through Ouya’s online marketplace) remains to be seen.

Ouya only has one rule for developers: Some element of their game must be free to try. Otherwise, there’s no barrier to publishing on the platform — not even some form of crowd validation, like with Steam Greenlight.

But Uhrman thinks the crowd can be an exceptionally useful resource for game developers. Crowdfunding a new project isn’t just a way to fund development; it’s valuable market validation, too.

“You can put your idea out there and figure out if gamers want it,” she said. “The benefit of a crowdfunding site is there is evidence: You have the backers and the dollars they spent.”

To entice developers to bring their games to Ouya, the company operates a fund-matching program for Kickstarter projects called “Free the Games.” The initial version of the program came under fire from developers, who said it was too easy to game the system, but Ouya amended the fund rules to incorporate their feedback.

“I think that’s a great testament to what we’re trying to do [with Ouya],” said Uhrman in a recent interview with GamesBeat. “We may not get it right the first time, but we are going to keep at it until we do.”