Nintendo’s Wii U console is still struggling to sell and has negatively affected the Japanese video game giant’s earnings for the six months to September 2013.

Nintendo reported a profit of $6.1 million between March and September 2013, compared to a loss of $285.2 million year-over-year. This is despite an operating loss of $237 million for the period, which Nintendo attributes to an enhancement in advertising activity along with research and development for Wii U software.

In its financial highlights report, Nintendo says that Wii U hardware is still having a negative impact on profits, mainly due to price reductions in the United States and Europe.

Only 460,000 Wii U consoles sold worldwide between March and September 2013, a disappointingly low number for a machine that Nintendo has invested heavily in.

In comparison, the original Wii console sold 470,000 units during the same period, outperforming its successor in both Europe and the U.S.. Only in Japan did the Wii U outsell the Wii.

Wii U software sales were also poor despite Nintendo releasing two heavy-hitters in The Legend of Zelda: Wind Waker HD and Pikmin 3. Global sales of Wii U software were just 6.30 million units for the first half of the financial year. By comparison, the open world action title Grand Theft Auto V — which developer Rockstar originally considered releasing on Wii U — has already shipped 29 million copies to retail across the PlayStation 3 and Xbox 360 platforms in around six weeks.

Worldwide Wii U hardware sales now total 3.91 million, with software sales of 19.71 million. This at least gives a relatively healthy attach rate for the console, with an average of 5.04 games sold per hardware unit.

Despite a poor showing so far, Nintendo continues to forecast 9 million Wii U hardware sales for the financial year 2013-2014. This is a tough figure to hit, but Nintendo is banking on its upcoming Wii Fit U, Wii Party U, and Super Mario 3D World titles, along with the bundling of games with hardware units, to help turn things around.

By contrast, Nintendo’s 3DS handheld console continues to do well in all regions, selling 3.89 million units so far this financial year. Lifetime sales of the console are now at 34.98 million units.

Nintendo says that strong initial sales of Pokémon X/Pokémon Y, released worldwide in October, will help boost the console’s popularity even further. The release of the Nintendo 2DS, offering a redesigned machine with no 3D feature and a much lower price of entry, is also expected to have an impact on sales in the lead up to year-end.

In a statement to investors, Nintendo president Satoru Iwata said: “We strive to regain “Nintendo-like” profits for the fiscal year ending March 31, 2014 by providing many people with fascinating games and services.” He is clearly hoping that the end of the financial year brings better news than the $71.4 million profit reported for 2012-2013. 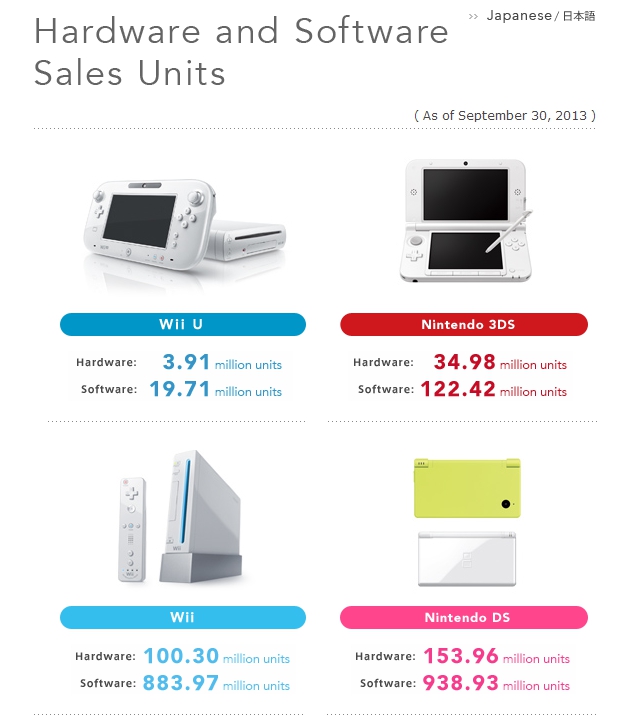