There are over four billion street lights in the world. Almost all of them are high-intensity discharge lights that use mercury vapor or some other toxic substance to create light. All of them require power, and most burn out every two years.

Now, what if all these could become nodes on a sensor network spanning the entire globe?

“Over the next 20 years, we’re going to install four billion DC power supplies 20 feet up in the air, and the install cost is already paid for … so we wondered: What else could you do?” said Hugh Martin, the CEO of Sensity Systems, to me yesterday. His company is announcing today new smart streetlights, with sensors and a connecting network. “These four billion lights are crying out to be elements of a brand new network.”

The answer to what you could do, according to Sensity, is a global network of smart lights jam-packed with sensors for moisture, ambient light, seismic activity, radiation, wind, temperature, air quality, audio, MAC address tracking to detect cellphones, and yes, audio and high-def video, all joined together via a 5 gig wireless system that supports both point-to-point and mesh networks, connects to intermittent Internet backbone, and uploads the largest trove of planetary data the world has ever known up to the cloud.

In other words, either Halloween for scientists, with data tricks and treats like they’ve never seen before, or the mark of the beast.

Gathering the data is just the first step, however. The ultimate goal is a planet-sized app store with god’s own treasure trove of data to wallow in like pigs in a continent-sized mud hole. Sensity is building the data collection, APIs, and software development kit, and it will invite third-party developers to create applications based on the massive amount of data. 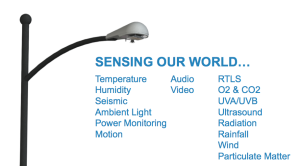 The first helps you turn your lights on and off, save energy via motion-based dimming, monitor how much power you’re using, and manage maintenance (many cities hire companies to do nothing but drive around and look for street lights that have burned out, Martin tells me). These apps are free — they come with the smart lights.

The second class of apps provide a new level of capability.

Security is one application, with video or audio. Gunshot detection, which many cities pay for currently, is in this class — and with an accuracy that’s never been seen before, with literally tens of thousands of audio sensors scattered around medium-sized cities. MAC address tracking that senses local mobile phones and tells parking lots when people are coming, stadiums and events how many to expect is another. Sensors that cities or companies can use to help people find open parking spots, safety, and surveillance are all in this category. For this class of apps, Sensity charges a small fee to application providers, who use Sensity’s APIs and development tools to build integrated apps to help cities and counties, states and countries process all this information into a manageable form.

The third class, the class that has nothing to do with the “guy” who owns the lights, is planetary data: earthquake detection, global warming data, sunlight detection — Martin tells me about a solar energy producer in Albuquerque, N.M., who said he would “kill” for 15 minutes notification of cloud cover — and more. For these, Sensity plans to charge application developers a fee for access to the data, and then take a portion of that and return it to the city or public authority that owns the lights.

In other words, this is making your municipal lighting a profit center, not a cost.

It’s truly a planet-sized vision, an ingenious solution, and a network with obvious power and application, that might even help pay for itself — and the base technology it is built upon.

But can cities afford it?

The bulbs in the streetlights in your city and on your highways cost anywhere from $150 to a few thousand. They burn out every two years, and a ballast transformer in the light burns out every three years, costing another $60-$70. And then, of course, it’s another $150 to get the bucket truck and the union guy up to the light to replace the failed components.

Sensity has a better plan. 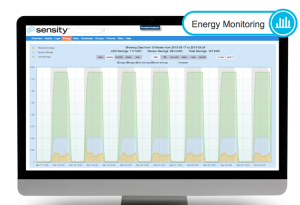 “We can now build high-output LEDs that can equal the light output of street lights,” Martin says. “They’re instant on and instant off, have a much nicer color spectrum, and use just 30 percent of the energy — you save 70 percent — of high-intensity discharge lights. And, they burn out every 10-15 years.”

Yes, they cost more, Martin concedes, perhaps $100 more, but the earn-back period is just two years, and in some cases as little as one. That’s good enough for many cities, who have already announced intentions to switch — like New York, which will be all-LED by 2017, saving $14 million every year.

That changeover is giving lighting manufacturers like Phillips, GE, Cree, and Accuity Brands hot flashes of excitement, as they see billions upon billions of dollars of investment into global outdoor lighting infrastructure over the next few years. But it’s also setting off light bulbs in other people’s brains.

“We’re a bunch of networking jocks,” says Martin, who founded ONI Systems, which is not an organization in the Halo universe but a high-speed optical telecommunications company that IPO’d in 2000 and sold itself to Ciena in 2002. “We thought LEDs are semiconductor-based devices — in every one of these, we’re going to have to put in a power adapter because they run on DC, not AC — what an amazing opportunity. It’s a perfect place to put a network.”

I talked to Martin LaMonica, a contributing editor at the MIT Technology Review who follows the green energy space.

“It does make sense to use the lighting infrastructure to collect other sensor data … mostly because it’s there,” he said. “What remains to be seen is whether it’s going be cost-effective.”

Sensity Systems thinks it will be — and with the company’ tripartite app ecosystem, they might just be right. Its sensor package costs about $150, a fairly small sum compared to the regular replacement costs of existing lights. And, of course, it comes with the promise of revenue returning to the owner of the lights.

Other companies, such as Echelon, are also trying to make street lighting smart, and have existing installations in over 500 cities. None, however, have the data model — and revenue model — that Sensity is promoting.

But dollars, of course, is only one aspect of the issue. There’s also privacy.

A global network collecting data like this is something we’ve never seen the like of before. And its capabilities are potentially vastly greater than anything the NSA has done in terms of Prism and XKeyScore. A network of smart lights that are capable of recording audio and video, where it can be shot up to the cloud and analyzed by apps, potentially, that have face-recognition capabilities, is at least slightly Orwellian. 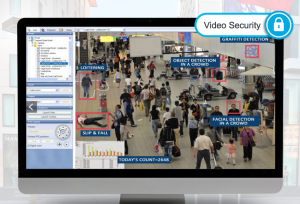 My TV may not be watching me, but my streetlight could.

That’s not a shock to Martin, and he has a plan. Sensity Systems plans to engage with the ACLU very shortly and hire a chief privacy officer, in order to build out a set of protocols that will ensure that citizens’ privacy rights are respected. And apps will need to be approved — “we’ll be more like Apple than Google,” he says.

“We are definitely going to help foster the discussion of discussion of privacy versus security,” Martin says in the understatement of the century, with only a faint hint of irony in his voice.

The goal, for Martin, is clear.

“Smart city, smart country, smart rivers … smart everything,” he says when I ask about smart cities and Sensity’s role.

Smart cities, of course, is an idea that hasn’t really caught on — despite IBM’s best efforts — mostly due to cost, and that fact that no one person at any city is in charge of it. Martin knows that, and points out that both the money and the payback are nonexistent in previous smart cities efforts.

That could change with Sensity, especially given its very modern business model: Making money on data flows. Interestingly, the light owners own the data, but they license it permanently to Sensity, which then can build monetizable applications on top of it.

The company already has 230 customers using its lights and sensors, including HP, Nikon, Kaiser Permanente, and the Sacramento County airport system. That’s a long ways from the world, but the company does have a all-star cast of executives, and Martin has three previous successful exits under his belt. In other words, it’s not a fly-by-night organization.

Next step, the world?