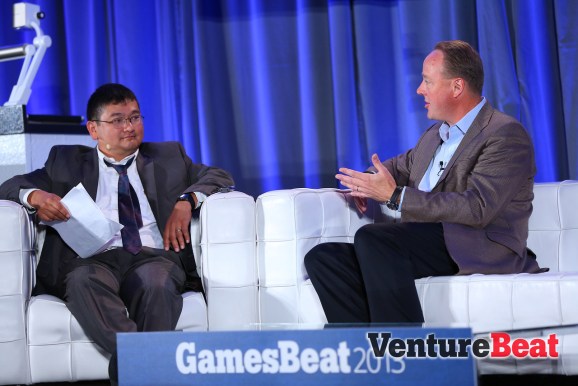 Mike Gallagher has the stats to prove gaming's ever-growing appeal over TV.

REDWOOD CITY, Calif. — Not every consumer knows how big the video games business truly is. The truth, according to Entertainment Software Association (ESA) president Mike Gallagher, is in the numbers.

During GamesBeat 2013’s “The Changing Face of Games and Gamers” chat, Gallagher broke down the statistics, which are quite telling.

The biggest figure in Gallagher’s eyes is 176 million — that’s the install base of digital platforms such as Steam, PlayStation Network, Xbox Live Arcade, Origin, and Wii U combined.

According to Statistiscbrain, 56 percent of TV owners pay for cable TV. However, as Parentstv.com points out, only 7 percent of U.S. households in 1970 had cable TV, which means it’s taken more than 30 years for cable TV to reach this install base. By comparison, Steam, the oldest of social-digital platforms, launched in 2003. Origin, PSN, XBLA, and Wii’s digital offerings came within that same decade yet have collectively matched TV’s install base in a third of the time.

The other part of this rapidly expanding growth comes from the array of media devices.

“Twenty-five apps in the Apple App Store are responsible for 50 percent of the revenue,” Gallagher said. “Twenty-four of the 25 [are] video games.” Furthermore, as Gallagher points out, when it comes to time spent on tablets, consumers spend two-thirds of that time playing video games. Additionally, 43 percent of the time, people are playing games on their mobile phones.

As far as intrigue goes, Gallagher cites some comparable numbers from the Electronic Entertainment Expo (E3) in Los Angeles this year, which included 50 billion “media impressions.”

“There’s only 7 billion people in the world — [and] only 2 billion have Internet access,” Gallagher said.

This exponential growth, he says, is continuing to swell, which in turn is creating a job demand.

He said, “385 colleges and universities offer curricula in video games or video game degrees.” Why? Because video games growth is requiring a larger workforce to meet demands for consumer products.

Considering this generation’s video game offerings — Ouya, Steam Machines, and Oculus Rift come to mind, not to mention Sony’s and Microsoft’s next-generation consoles — the industry has definitely shifted into a higher gear.

“This is a fantastic time to be in this industry,” said Gallagher.