When Cecilia Abadie drove with Google Glass last night, she thought she was pushing forward Google’s vision for the future. Instead, she got a ticket.

The reason? According to the police, Abadie was “driving with monitor visible to driver (Google Glass).” Also, she was speeding. 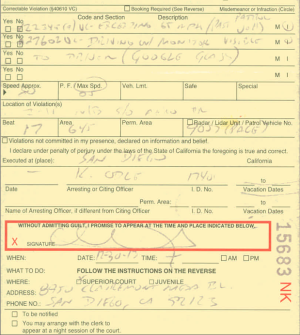 Above: “Driving with monitor visible to driver” is enough to get you a ticket in San Diego.

Abadie, who calls herself a Google Glass pioneer, fell victim to a California law that forbids drivers from operating vehicles while distracted by a video device.

Considering that Glass, at its most simple, is a video display that you strap to your face, it should be fairly obvious why the San Diego police thought she deserved a ticket.

But were they right? It’s too early to say for sure, but Abadie could make the argument that Glass is a “global positioning display,” making it exempt from the law. (Abadie, however, maintains that the Glass display wasn’t on at all when she was pulled over.)

From Google’s perspective, Abadie’s error is more clear: She didn’t know her local laws. Here’s how the company answers the “Glass and driving” legality question:

As you probably know, most states have passed laws limiting the use of mobile devices while driving any motor vehicle, and most states post those rules on their department of motor vehicles websites. Read up and follow the law! Above all, even when you’re following the law, don’t hurt yourself or others by failing to pay attention to the road. The same goes for bicycling: whether or not any laws limit your use of Glass, always be careful.

Wrong or not,  it’s likely that Abadie will fight the ticket if not just for herself but also for all other Glass owners who will be put in the same situation before long.

And she’ll have lots of support. Abadie’s Google+ page has already been flooded with encouragement — though some of it’s not entirely selfless.

Above: Regular knights in shining armor, these guys.