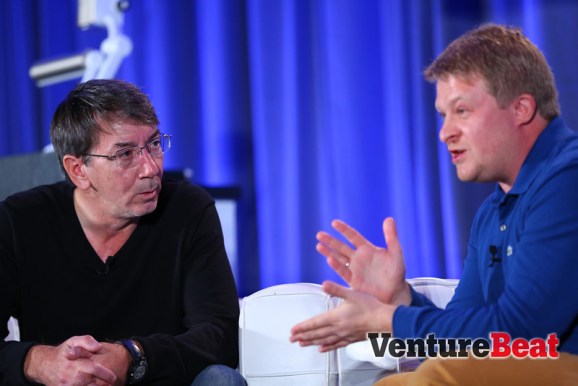 SimCity and The Sims creator Will Wright with Wargaming.net CEO Victor Kislyi at GamesBeat 2013 on Wednesday.

REDWOOD CITY, Calif. — For Wargaming.net chief executive officer Victor Kislyi, the biggest enemy in World of Tanks might not be the other team. It’s the fairer sex … sort of.

“It’s not a surprise, but the biggest enemy of World of Tanks is women, you would think,” Kislyi told SimCity and Sims creator Will Wright during a GamesBeat 2013 chat.

He said, “You want to spend your little 30 minutes playing World of Tanks. But you have some other duties to do, right? So for us, the biggest challenge is the justification of World of Tanks in the eyes of our better halves.”

Having read posts on Russian Facebook and women’s forums, Kislyi said that “wives are now bragging” that their husbands are playing World of Tanks: “They say, ‘Yeah, at first it was irritating. But look, [my husband and kids] are spending quality time together.’ They’re reading books. They shout, they cooperate, they give high-fives when they win battles.”

With that, Kislyi sees World of Tanks as an opportunity to foster intergenerational connections between family members though he drew from his own experiences, mostly leaving girls and women out of that equation: “My brother lives in California. I live in eastern Europe. We go as a platoon every week a couple times, every time. We’re doing battle, making conversation. So I can see fathers and sons, or brothers, using it as a communication tool.”

World of Tanks’ appeal to men and boys was a recurring theme throughout Kislyi’s discussion, which focused on heavily fostering the game’s large community. Addressing Wright’s comment that World of Tanks has consistent appeal across multiple territories worldwide, Kislyi said that the game’s target demographic is an advantage.

“Asia approaches games a little differently, but the good news for us is that they’re boys,” Kislyi said. “This game, World of Tanks, is for grown-up boys, and they’re 90 percent the same across the Philipines, Korea, America, or Russia.”

Kislyi’s conclusions are drawn in large part from an extensive system of analytics. A company with roughly 2,200 employees, Wargaming.net has a support staff spanning Emeryville, Calif.; Tokyo; Singapore; and Paris. Its mission, he says, is to pick the brain of the consumers and find out what the community wants.

“We can filter by season, time of day, patch … you can immediately see responses. If they’re going up, good deal,” Kislyi said. “Sometimes it crashes because something is wrong.”

With this data, World of Tanks boasts what Wright praised as an involved, tight-knit community that’s been “nurtured and fostered by the company.”

The foundation for that community is an appreciation for toy tanks that Kislyi considers almost universal among young boys. Wright, a self-described World of Tanks addict, is among those who are reminded of a childhood spent playing with model tanks. It’s for that reason that Wargaming.net has a whole department dedicated to historical accuracy.

Thus far, Wargaming’s laser focus on catering to male tank enthusiasts has paid off. In 2012, it boasted some 45,000,000 registered players worldwide. Wargaming.net will soon release a warplanes-themed spinoff, with another based on battleships in the works as well.