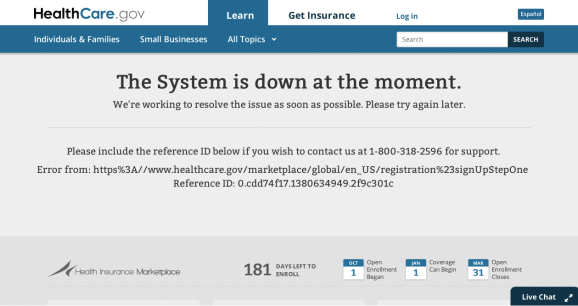 CNBC is reporting that some of the largest tech companies, including Google, RedHat, and Oracle have jumped into the fray to help fix the technical issues with HealthCare.gov.

According to a report, “big guns” from these companies have been dispatched to the White House for an urgent ‘fix it’ operation. Their goal is to make the clunky website more agile, and capable of handling an influx of traffic.

Michael ‘Mikey’ Dickerson, a site reliability engineer on leave from Google, and Greg Gershman, innovation director for Mobomo have been named by the Obama Administration. According to CNBC, they are working closely with the major federal contractors, including CGI Global. Dickerson previously worked on the Obama reelection campaign.

“I know it’s a very political topic,” Oracle Chief Executive Officer Larry Ellison said today at the software maker’s annual meeting, Bloomberg reports. “As an information technology company we are doing everything we can to help.”

It’s not all that surprising that tech companies are pitching in to help — it’s a huge public relations win for any firm that can make much-needed improvements to the online health exchange.

“They are working through the analytics of what happens on the site to prioritize what needs to be fixed,” Julie Bataille, a spokeswoman for the Centers for Medicare and Medicaid Services told reporters on a conference call.

However, our government sources are not convinced by this notion of a “tech surge,” which the feds began touting on Oct. 20.

It won’t be as simple as some brilliant Google programmer saving the day with some magic code. Former White House chief technology officer Aneesh Chopra pointed out in a recent interview that no technology “super hero” can fly in to save the day. “Even if the government recruits talented engineers from consumer tech companies, whoever builds this site has to take care of it,” said Bob Kocher, an investor at Venrock, who helped write the Affordable Care Act.

In addition, the feds can’t accept free services from private companies. The Department of Health and Human Services (HHS) will need to find budget to pay for the rescue mission. HHS has spent an estimated $300 million on the HealthCare.gov website alone.

Last week, Office of Management and Budget director Jeffrey Zients was appointed to lead efforts to improve the website, which has been plagued by technical defects since it launched on Oct. 1. The government is hoping the website will function without a hitch by the end of November.