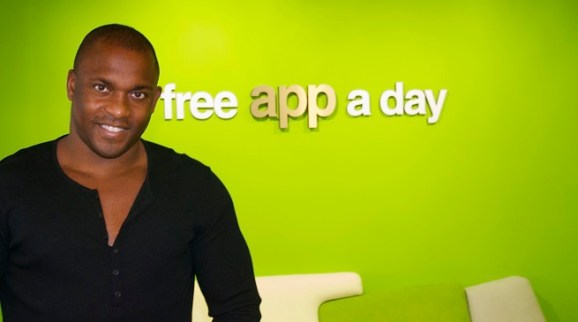 ICS Mobile, the creator of the FreeAppADay.com promo site, has launched its new app to help you find even more cool pieces of mobile software: AppXchange.

The Santa Monica, Calif.-based company previously announced that it had teamed up with the big talent agency ICM Partners to get A-list celebrities to promote its new platform. The new app, formerly codenamed ProjectX, has received Apple approval, and it will help apps spread among friends and families, said Joe Bayen, the chief executive of ICS Mobile.

FreeAppADay.com has generated a community of more than 10 million users who go to the site on a daily basis to get paid apps for free in one-time promotional deals. But it’s the kind of site that Apple tolerates but doesn’t really like, because this is the sort of place that developers could use pay to boost their apps in the App Store. Apple prefers apps to get to the top of the charts from people finding them on their own, not paid promotions.

“With close to a million iOS apps, discovery has become a major challenge for both end-users and developers,” Bayen said. “AppXchange aims to simplify the tedious task of sifting through the AppStore by not only allowing users to easily share their app knowledge with each other but also making accessible the app knowledge of experts in various industries.”

Bayen said that the AppXchange will introduce a compelling twist on the app discovery problem that has plagued developers. Those developers can publish easily on the App Store, but their apps can easily get lost among the 800,000-plus live apps in the App Store. The idea is simply to use celebrities to promote the apps they like and to influence users to try them out.

The ICM celebrities who participate will post on their Twitter accounts about AppXchange a couple of times a month, saying something like, “If you want me to give you some great app recommendations, follow me on AppXchange.” The celebrities can engage with their audience within the AppXchange by recommending apps. ICS Mobile will share revenue with the celebrity when a user clicks on a sponsored link.

AppXchange is a crowdsourced social app discovery platform. It will provide tailored app recommendations through a network of experts in industries that include music and movie celebrities, gaming, athletes, high-profile chefs, entrepreneurs, blogging moms, and more.