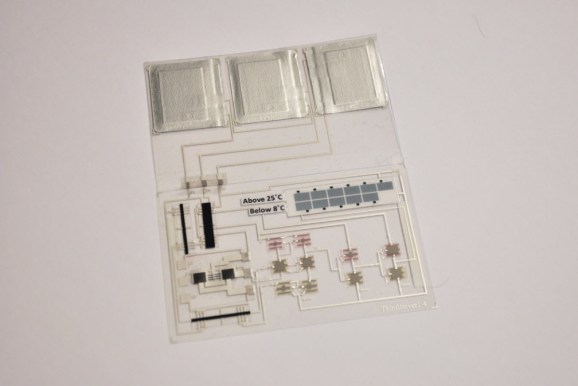 Norway-based Thin Film Electronics said it has raised $24 million to create flexible electronics on plastic sheets. The money will help the company on its mission of embedding electronic smarts into the “internet of things.”

The company is selling its printed electronics under the Thinfilm Memory brand name, and it has created sensors, displays and other devices for use in a variety of goods.

Thin Film Electronics has created a full system for a disposable printed electronic tag — a modern sensor system that could replace product bar codes — for a fraction of the cost of other competing products.

Invesco Asset Management’s funds have agreed to acquire 46.7 million shares in the publicly traded Oslo company for NOK3.00 per share for a total of NOK140 million, or $24 million. That will give Invesco an additional 10 percent ownership of Thin Film Electronics. Earlier this month, Invesco acquired 13 percent of Thin Film in a private placement.

“Since Invesco’s original investment, we have seen intense international interest in Thinfilm,” said Davor Sutija, chief executive of Thinfilm. “The investment announced today will provide a tremendous opportunity to deliver our vision for the Internet of Everything, in which printed electronic objects become part of the network through near-field wireless communication.”

To date, vendors have cobbled together electronic tags from a variety of components. But Thin Film Electronics has pulled the components into an integrated system that can be printed onto flat stickers or plastic films. And it can add rewritable memory and sensors to the system. Within a matter of a few years, these smart tags could be used to get rid of the aging laser-scanned bar code and enable what tech visionaries like to call the “internet of things,” where everyday objects can access the internet and produce a huge volume of sensor data.

The technology is based on “flexible electronics,” which is the subject of a broad alliance of technology companies in the Flex Tech Alliance.

The system for a printed electronic label can be made with technology that resembles the inkjet printers that spray ink onto paper. But in this case, the manufacturer sprays electronic circuitry onto surfaces such as thin films. The system includes printed memory, sensors, and a processor. It will be a few years before the system is in mass production, but it’s a good start.

The labels could enable item-level tracking for goods such as pharmaceuticals and perishable foods. They could also be manufactured for about a tenth of the cost of the competing solution, which in this case would be an active radio-frequency identification system (RFID).

Thin Film Electronic has taken three printed components — memory, logic, and a temperature sensor — and gotten them to work together. The device senses temperature and writes the results to memory. The data can then be output to a display. This system would previously have to be made out of different components that use different materials.

Thin Film Electronics is listed on the Oslo Stock Exchange. It started in its current form in 2008. Portions of its work were funded by Innovation Norway and Flex Tech Alliance.