Can you smell what 2K is cooking? Smells a little like leftovers to me.

Don’t be confused by the slightly new branding. After taking over publishing duties for the yearly WWE games from the now defunct THQ, 2K played things safe with its first offering for wrestling fans.

WWE 2K14, out now for the Xbox 360 and Playstation 3 (I played the 360 version), plays nearly identically and includes almost most of the same features as last year’s WWE 13. However, a surprisingly hefty and nostalgic single-player mode makes WWE 2K14 a necessary purchase for prayer-saying, vitamin-taking wrestling fans. 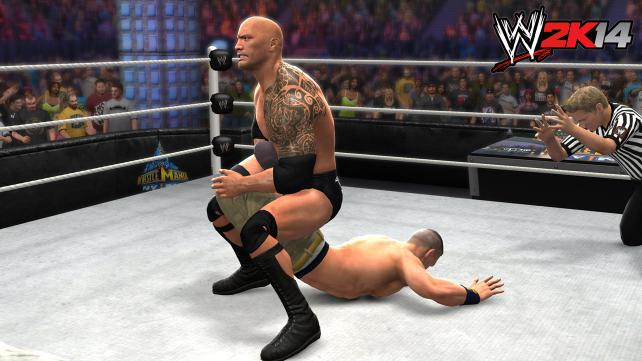 Above: The Rock tries to get John Cena to tap out.

Last year, I praised WWE 13’s Attitude Era mode, in which players relive matches and moments from one of professional wrestling’s greatest generations. WWE 2K14 offers a similar experience with its 30 Years of Wrestlemania mode, except this campaign re-creates matches from the WWE’s biggest pay-per-view event, Wrestlemania.

You play at least one match from every Wrestlemania, from the 1985 original to last year’s Wrestlemania 29. While you just need to win each event to unlock the next one, you can get new characters, costumes, and arenas if you re-create specific moments as they happened in the actual match, like body-slamming André the Giant as Hulk Hogan at Wrestlemania III or making Stone Cold Steve Austin pass out while in Bret Hart’s Sharpshooter at Wrestlemania 13.

It’s largely a nostalgia act, but it’s a wonderfully executed one.

Small details, like the grainy filters for the older matches, and larger ones, like the re-creation of every Wrestlemania arena, give the mode an authentic feel, and snazzy video montages set up the backstories for many of the more iconic battles. 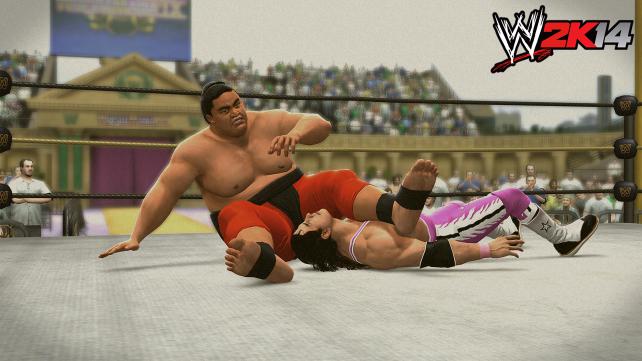 The mode is surprisingly lengthy, but I was always eager to see which Wrestlemania moment I’d get to re-create next. And while some big matches were missing (no Randy Savage vs. The Ultimate Warrior from Wrestlemania VII), and some that did make it in seem unworthy and unnecessary (like Triple H and Randy Orton’s forgettable main event fight from Wrestlemania 25), developer Yukes has overall put together a great collection of enjoyable and memorable encounters.

Plus, you’re constantly unlocking new content, so you’re always rewarded with new characters and arenas while you enjoy the 30 Years of Wrestlemania Mode’s nostalgic trip through WWE history.

Speaking of those unlocks, you’ll have a massive roster of wrestlers to choose from by the time you finish the 30 Years of Wrestlemania mode, with a pretty even split between modern stars like John Cena and CM Punk to old favorites like Hulk Hogan and Macho Man Randy Savage. You could spend a good amount of time just staring at the 103 wrestlers on the character select screen. 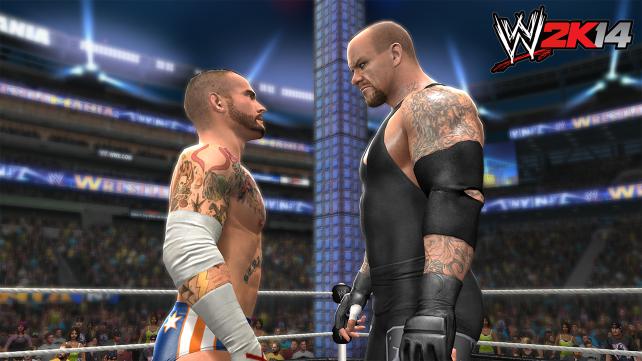 Above: CM Punk and The Undertaker stare each other down.

WWE 2K14’s other notable single-player mode is another tribute to Wrestlemania’s history, but one that focuses on just one superstar: The Undertaker. Taker’s never lost at Wrestlemania, with an overall record of 21-0. Fans love rooting for the Dead Man and seeing him remain unbeaten, so the addition of a mode that focuses on the famous streak is a nice touch.

The Streak has two parts. One is a simple endurance mode, where you play as Undertaker and battle challenger after challenger. You can also choose to try to end the streak by playing as any wrestler (besides The Undertaker, of course). Taker’s difficulty is appropriately jacked up to a ridiculous level. I tried a few times, but I never came close to beating him. However, the challenge is irresistible, and this is one of the few times where a cheap fighting game boss actually feels appropriate.

Despite the new publisher, WWE 2K14 plays pretty much identically to WWE 13, minus a few welcomed improvements to character movement and animation.

Now, in a way this is fine, since WWE 13 played pretty great, but you still often feel like you’re playing the same exact game that you already bought last year. All of the creation modes for things like custom characters, entrances, and finishers are back pretty much exactly as they were in WWE 13 (and for WWE 12, and WWE Smackdown vs. Raw 2011, and … yeah, you get it).

You can use existing superstars as a template this time, so you can put an oversized cowboy hat on Undertaker if you want. That’s worth a good chuckle, I guess. Still, the once seemingly endless amounts of options for customization are beginning to look stale.

Last year, I complained that WWE 13 wasn’t the prettiest sports game. Unfortunately, WWE 2K14 suffers from pretty much all of the same aesthetic problems. Blurry clones with lame, looping animations fill up the crowds, and a lot of the digital wrestlers bear little resemblance to the real thing.

I understand that they’re probably waiting for the series to take the leap to next-gen systems before overhauling the graphical engine, but that transition can’t come soon enough.

Despite all that mechanical and graphical sameness from WWE 13, WWE 2K14 is still an easy recommendation for wrestling fans. Nostalgic WWE enthusiasts will love the enormous roster of modern and classic superstars, and the 30 Years of Wrestlemania mode is the most entertaining single-player campaign the series has seen. This is certainly enough to keep me satiated until the franchise goes next-gen.

WWE 2K14 is out now for the Xbox 360 and Playstation 3. The publisher provided GamesBeat with a copy for the purpose of this review.