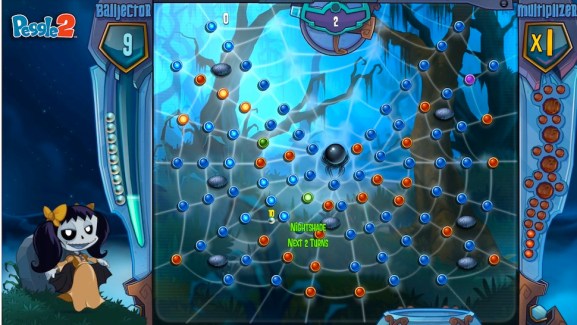 The character Master Luna from Peggle 2 has capabilities that enable her to ghost through the less-important blue pegs.

Peggle 2 is no longer a launch game for Xbox One.

Microsoft’s next-gen Xbox One will debut on Nov. 22. Alongside the new system, gamers can pick up EA shooter Battlefield 4 or download titles like Microsoft fighter Killer Instinct. Xbox One owners will have to wait, however, for physics puzzler Peggle 2.

Developer PopCap is now aiming for the Xbox One’s launch window, which means it should hit Xbox Live before the gift-giving holidays.

“Peggle 2 is a ‘launch timeframe’ title,” PopCap senior director of PR Garth Chouteau told GamesBeat over e-mail. “But [it] will not launch day-and-date with the Xbox One — instead, it will become available a few weeks later in December.”

The studio isn’t announcing a specific launch date at this time.

This is contrary to what Microsoft has said since the European Gamescom industry event in August. At that time, Microsoft stated that Peggle 2 would debut on Xbox One’s launch day. We wrote about that in an article with the now out-of-date headline: “Peggle 2 is an Xbox One launch game.”

In response to that, PopCap says it might have “mischaracterized” Peggle 2 as a launch game when it intended to position it as a launch-window release. If that’s the case, it fooled Microsoft as well.

Microsoft’s own Xbox News website still has Peggle 2 (and Watch Dogs) listed as launch-day games in a post from Aug. 20.

Chouteau did confirm that more info regarding Peggle 2 is coming soon.