Snow falls on the empty streets of Gotham City while most of its citizens are indoors celebrating. Meanwhile, Roman Sionis, the criminal also known as Black Mask, has gathered eight of the world’s best assassins and given them one night to hunt down the constant thorn in his side: Batman. Long used to being the ultimate predator on the streets, Batman now has to cope with being the prey.

Warner Bros. Games Montréal takes the helm of this third installment in the Batman: Arkham series. Available now on PC, Xbox 360, PlayStation 3, and Wii U, Batman: Arkham Origins bills itself as a grittier prequel to the first two entries. While it doesn’t represent a proper origin story, it serves as Batman’s first time encountering some of his iconic foes, at least in the timeline started by developer Rocksteady Studios in Batman: Arkham Asylum and Batman: Arkham City.

Multiplayer also makes its first appearance in a Batman: Arkham title. Players assume the role of members of opposing gangs who must war with each other while avoiding the two other players randomly chosen to act as Batman and Robin. While fun and often hectic, the multiplayer action lacked the depth to keep me interested in the long-term. Ultimately, I think I would rather have seen the time and manpower devoted to cleaning up some of the rough edges in the single-player experience. 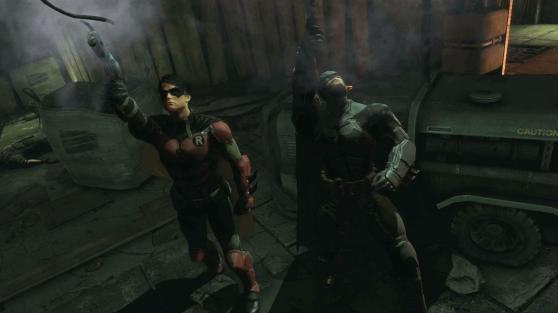 Above: Robin also makes an appearance in multiplayer.

All the things you’ve come to expect from a Batman: Arkham title are still here: dynamic, free-form combat; oodles of gadgets; and a good amount of additional content (side quests, challenges, and collectibles) to keep you busy after you complete (or during) the main story. The controls and most of the gameplay are completely unchanged, so playing Arkham Origins very much feels like returning to a comfortable and familiar old friend. If you’ve played either of the sequels, you’ll have no trouble jumping back into Batman’s boots and laying the smackdown on unsuspecting criminals.

All of your favorite Bat-gadgets make a return although the ice grenade is now a glue grenade, despite being used in the same exact manner (closing steam pipes and creating platforms over water). New additions include the multipurpose remote claw, which you can use to create your own high wires, pull two enemies together, or create painful collisions between your foes and environmental objects as it yanks them toward each other — and the shock gloves, which allow you to perform quick knockouts when they’re fully charged.

People often forget that Batman is also known as the “world’s greatest detective.” Arkham Origins finally gives you some glimmer of this by giving Batman the ability to scan crime scenes for evidence, digitally reconstruct the crime itself, and move forward and backward through these reconstructions to find additional clues. It’s refreshing to use Batman’s detective vision for something more complicated than tracking a blood or scent trail or finding interactive objects in the environment.

One such case file has you investigating a distress call, which later results in a helicopter crash. Batman first scans the wreckage and the dead pilot, which leads him to discover where the helicopter came to rest. Further scanning on the rooftop uncovers the tail section and the reason the helicopter crashed in the first place: It was shot down. The final part of this case enables you to track the trajectory of the bullet that downed the helicopter, which ends in a showdown with one of the game’s villains. 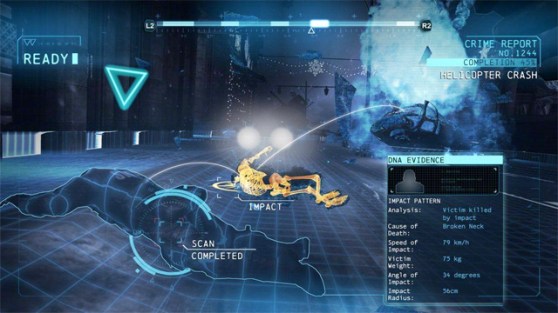 Above: Batman investigates a helicopter crash.

These investigations finally made me feel like I was tracking down bad guys for real — instead of just following waypoints on a map — and added a level of depth that I felt was missing in the previous Arkham titles. The only complaint I have about this new feature is that I wish the game featured more of these interactive crime scenes.

More criminal activity than you could possibly thwart in one night

In addition to the primary storyline, which most estimates peg between 8-12 hours, Arkham Origins has a lot more to offer to keep you busy. The “Most Wanted” side missions enable you to track down and thwart some of the iconic Batman villains that aren’t tied directly to the main plot. Defeating Enigma will require you to shut down his network and collect the data files he was gathering to blackmail others. Tracking down and destroying hidden weapon caches will help you bring the Penguin to justice, and you’ll have to battle through hallucination-filled challenges to break free of the Mad Hatter’s control.

In addition to the case files mentioned above, you also have a seemingly limitless number of crimes in progress that you can interrupt and a series of challenges built into the game that reward you for combat prowess and taking down enemies in creative ways. With all of this content, it becomes comically improbable that Batman could accomplish in one night (according to the story) what could potentially take you days to complete in the real world.