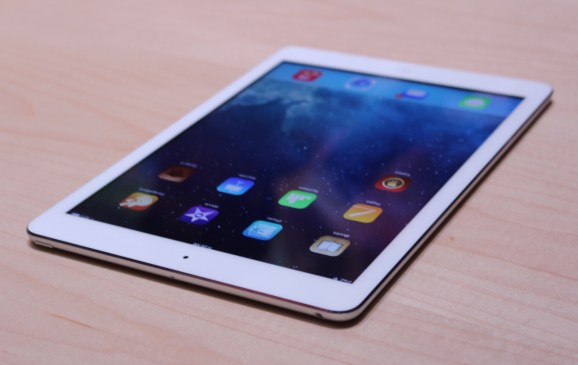 The iPad Air comes in white (with silver) or black (with space gray).

Four days after its release, the iPad Air is selling at a much faster pace than Apple’s previous models. In fact, within two days of launch, the iPad Air had five times the usage that iPad 4 had after its own launch, and three times that of the iPad Mini.

“If the iPad Air follows the same general trajectory from this accelerated start, then Apple CEO Tim Cook’s prediction that “it’s going to be an iPad Christmas” is likely to come true,” a representative from mobile app analytics company Fiksu told me.

There are a number of reasons for that, of course.

One is simply the number of launch countries. While the iPad 4 was launched in 27 countries, the iPad Air is being launched in 42 countries simultaneously — including China. Another is that this is the first full-sized iPad that has seen a significant, visibly obvious hardware difference: smaller size.

The high usage is a validation of Apple’s tablet strategy.

iPad Air is the most significant change to Apple’s full-sized tablet since the original iPad, with lower weight, a 64-bit processor, and a slimmer body, all adding up to a tablet that’s easier to hold in your hands. Which means that current iPad owners are seeing a reason to upgrade, perhaps for the first time in two product generations. And while the device is selling in many more countries at launch, it’s also competing with a larger number of active iPads in the marketplace for usage share.

iPad Air is still only .7 percent of all iPads for usage share right now, so there’s a long ways to go. iPad 2 is still the most common iPad in the wild, with a 38.6 percent usage share.

But a good Christmas shopping season could do a lot to change that.