If you’re thinking about buying a new sports-utility vehicle — but you’re not sure if you’re ready to commit to the purchase — you should check out Land Rover’s interactive ad for the 2014 Range Rover Sport. The car company thinks it might win you over.

Land Rover has a new digital ad called Race The Sun that combines high-quality film making with interactive elements to engage potential customers. The commercial has players sync their touchscreen smartphones with the Race The Ad experience online. Viewers can then swipe and tap their phones to give commands while a short film plays on the screen.

Players can’t change anything that happens in the film. The driver of the 2014 Range Rover Sport always dodges the obstacles and always succeeds in his goal. Players are instead simply judged on how accurately they tapped and swiped the onscreen prompts.

The point of something like this is to make sure people are looking closely while a product does amazing things onscreen, and Land Rover thinks these mild gaming mechanics is the key to that type of engagement. 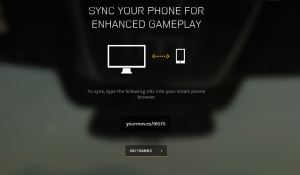 Above: Race the Sun prompts players to connect a smartphone for “enhanced gameplay.”

“Digital is a core element of Land Rover’s marketing strategy,” Land Rover North America digital marketing and social media manager Kim Kyaw told GamesBeat. “Our target consumer is digitally savvy and indexes high for mobile and tablet usage during the vehicle shopping process. Our goal is to communicate in ways that are relevant and add value to their experience.”

Staying relevant to people who own tablets and smartphones is important to Land Rover.

A 2014 Ranger Rover Sport starts at $62,600. At that price, Land Rover wants to engage the savvy consumer who has an iPad and MacBook Pro because that person is also more likely to have the money to spend on a luxury SUV.

The Race The Sun ad begins with a mysterious man in a suit telling the hero (and Range Rover owner) that he has until sundown to make his “move.” The screen then asks players to sync a phone or tablet for gameplay by going to a mobile browser and entering a custom URL. Land Rover wants to sell its vehicles to people who would have the gadgets required to do this.

Of course, players could hit the “no thanks” button when asked to sync a phone. That presents the option to use the keyboard or to just watch the video.

“In Race the Sun, we’ve given users multiple ways to engage with the experience, syncing their smart phone to a computer or using their keyboard, interacting with their tablet or simply watching the film,” said Kyaw. “We believe that these choices will allow users to interact in the way that best suits their interests.”

Despite the option to simply watch the video, Kyaw says that the interactivity is key.

“We have used interactive ads for other launches and those ads have shown increased time spent and engagement with the brand,” she said. “Race the Sun adds new levels of interaction through game-like elements. These elements not only educate the consumer about key features of the all-new Range Rover Sport but also provides an entertaining experience.”

I played it. I can say that I was engaged and maybe even a little entertained. As someone who games regularly, however, I was slightly annoyed that my accurate inputs weren’t having any effect on what I was seeing on the screen.

Regardless of my positive experience, I can’t imagine I would have found and then played the Race the Sun ad without doing it for research. It’s hard to see how something like this would bring in new customers.

This ad is in part built for people who are already fans of the Land Rover brand. But to bring in and engage people who aren’t actively seeking out information about the Range Rover Sport, Land Rover is placing bite-sized chunks of Race the Sun in banner ads and homepage takeovers. Consumers can interact with those ads and then find the full experience by clicking through.

The car manufacturer then hopes consumers will spread the game-ad through social networks.

“At the end of the interactive film, users are given a score and level designation that indicates how successful they were at keeping up with the all-new Range Rover Sport,” said Kyaw. “Users are then encouraged to share their score and level and ask their friends to see if they can keep up.”

Really, it’s Land Rover trying to keep up and even stay ahead. Consumers hate marketing, but sometimes a bit of novelty and creativity can break through that barrier and connect an audience with a product. By using gaming, Land Rover hopes that it accomplishes exactly that with its latest SUV.