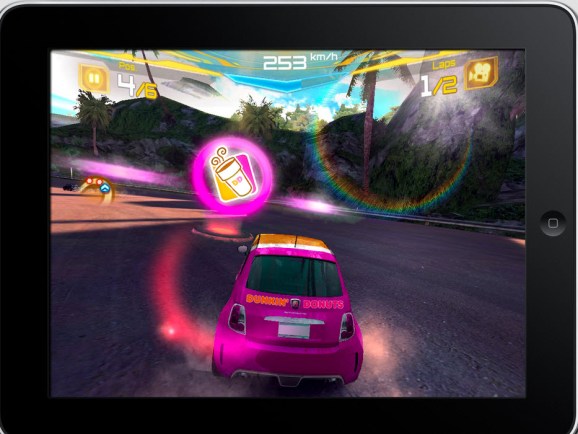 MediaSpike, a startup that uses automation to insert product placements into social and mobile games, is announcing today that it has raised $5.2 million in a first round of funding.

“Our game developers have been successful, and we’ve been getting good market traction,” said Blake Commagere, MediaSpike founder and chief executive, in an interview with GamesBeat.

MediaSpike reaches more than 20 million monthly unique users with its ad business, which places product advertisements inside mobile and social releases. So, if you visit a vending machine in a game, you might be able to purchase a virtual Mountain Dew soda.

MediaSpike believes its ads work for today’s gamers. It’s hard to get players to pay attention to banner ads in mobile apps or social games. The company calls this “banner blindness.” But MediaSpike creates ads that people notice because it inserts them into the middle of the action. It is part of the gaming experience, like the beer sign pictured above. You can imagine that the sign could be a Pepsi logo instead, and the customer at the bar could be buying a Pepsi. MediaSpike makes the process of inserting product placements easier through automation.

“We use technology to bring customers results,” Commagere said. “It’s exciting for us, and a lot of it is happening fast.”

Saad Khan, partner at CMEA Capital, will join MediaSpike’s board, alongside Commagere and chief operating officer John McCrea. Khan was among the first investors in MediaSpike, and he has been instrumental in the development and execution of the company’s vision.

MediaSpike will use the money to hire more people in Silicon Valley and New York. The company has nine full-timers and two part-timers. Commagere, a pioneer of early social games such as Vampires, created MediaSpike in 2011. Back in the spring of 2007, Commagere was a 30-year-old veteran of viral marketing and part of early social firm Plaxo, where he met the now-billionaire Sean Parker (of Napster and Facebook fame). Commagere saw that Facebook was about to open up its applications programming interface to third-party developers, and he began experimenting with apps that could spread to as many people as possible. He created memorable apps such as Zombies and Vampires. More than 50 million individuals played those releases, a huge number given Facebook’s relatively small audience at the time.